Harris-Decima's new poll shows national change within the margin of error, but the shifts that have taken place have narrowed the gap between the Conservatives and Liberals. 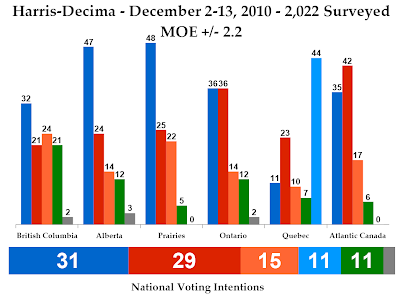 Since we last heard from Harris-Decima, the Conservatives have dropped two points and now lead with only 31%. The Liberals are up one to 29%.

Certainly not the 11-point lead some other pollsters have reported over some of the same field dates.

The New Democrats are down two to 15%, while the Bloc Québécois is up two points to 11%. The Greens are up one point to 11% in this telephone poll.

The Bloc is up five points and leads with 44%, a very good number for them. The Liberals are up two points to 23% while the Conservatives are down two to 11%. The NDP is down one to 10%.

The Liberals lead in Atlantic Canada with 42%, up nine points. The Conservatives have dropped 10 points to 35% here.

In Alberta, the Conservatives have dropped 14 points and lead with 47%. The Liberals are up seven to 24%. A 23-point gap would be a bit of a surprise in Alberta.

The Conservatives are up nine points in the Prairies to 48%, followed by the Liberals at 25%. 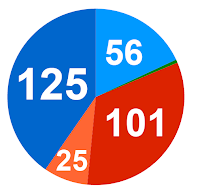 With this poll, the Conservatives would win 19 seats in British Columbia, 25 in Alberta, 21 in the Prairies, 47 in Ontario, three in Quebec, and nine in Atlantic Canada for a total of 125. That's one more than my projection for Harris-Decima's last poll.

The Liberals would win eight seats in British Columbia, two in Alberta, five in the Prairies, 48 in Ontario, 15 in Quebec, and 21 in Atlantic Canada for a total of 101. That's an increase of five seats over last time.

The Bloc would win 56 seats in Quebec, one more than October's projection for Harris-Decima.

The NDP would win eight seats in British Columbia, one in Alberta, two in the Prairies, 11 in Ontario, one in Quebec and two in Atlantic Canada for a total of 25, a drop of eight seats.

And before anyone asks, you can't have the Conservatives drop 18 points in Alberta, with the Liberals gaining 13 points and the NDP one, without some consequences.

This result is closer to what EKOS has found recently. That gives us two polling narratives - are the Conservatives way in front or has the situation not changed? This poll doesn't show the Conservative gains in British Columbia that even EKOS has reported, but it does show that the Tories are performing well in Atlantic Canada.

So are we still heading to a spring election? It still does not appear that any party but the Bloc is likely to make any major gains, but an election could still be called just to change things up. There appears to be a bit of political exhaustion in Ottawa. A reset may be required, even if it changes very little.
Posted by Éric at 9:24:00 AM