Nanos Research has blessed us with a new poll, showing change within the margin of error that increases the gap between the Conservatives and the Liberals to seven points. 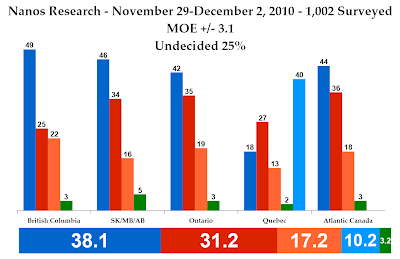 At 38.1% support, the Conservatives have increased their score from Nanos' last poll in early November by one point. The Liberals have fallen 0.4 points to 31.2%, while the New Democrats are up 1.8 points to 17.2%.

The Bloc Québécois is at 10.2% nationally, while the Greens are down two points to 3.2%.

While I always look suspiciously at polls that put the Greens at over 10%, it would be hard to believe that the Greens are also below 4%.

In the Prairies, which includes Alberta in Nanos' calculations, the Conservatives are down nine points to 46%. The Liberals are up three to 34% and the NDP is up seven to 16%. Assuming the Liberals are at 20% or so in Alberta, they must be doing very well in Saskatchewan and Manitoba to end up at 34% overall. 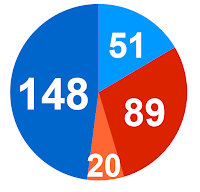 With this poll, the Conservatives would win 25 seats in British Columbia, 56 in Ontario, seven in Quebec, and 12 in Atlantic Canada. Giving them the 27 seats in Alberta and the 20 seats in the Prairies that I currently have them projected to win gives the party a total of 148 seats, well short of a majority, but 11 more than they were projected to win in Nanos' last poll.

The Liberals would win eight seats in British Columbia, one in Alberta, five in the Prairies, 39 in Ontario, 16 in Quebec, and 18 in Atlantic Canada for a total of 89, three less than last time.

The Bloc would win 51 seats in Quebec, unchanged from Nanos' last poll.

The NDP, despite national growth, would drop eight seats from the last poll due to the increase in support for the two main parties in British Columbia, Ontario, and Atlantic Canada. The NDP would win three seats in British Columbia, none in Alberta, three in the Prairies, 11 in Ontario, one in Quebec, and two in Atlantic Canada for a total of 20.

Aside from an improbable jump in support in British Columbia, there is not much in this poll that is different from Nanos' last report for the Conservatives. It does confirm a Conservative lead in Ontario and adds weight to their findings that the Tories are doing very well in Atlantic Canada. The Liberals shouldn't panic just yet - 31% is better than their 26% in 2008, and this poll has them competitive in every part of the country, including Alberta, Saskatchewan, and Manitoba.
Posted by Éric at 9:09:00 AM