On December 7, Angus-Reid released a poll taken in mid-November in Manitoba. It shows marginal movement from their last poll taken in late August, but the movement that has taken place is not to the benefit of the challenging Progressive Conservatives. 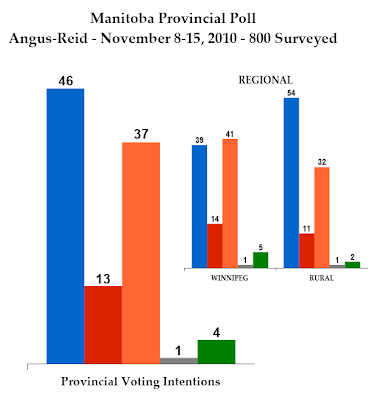 Compared to that last poll, Hugh McFadyen's Progressive Conservatives have lost three points and now lead with 46%. The New Democrats are up three points, and trail with 37%.

In other words, the gap has been reduced from 15 points to nine.

The Liberals, who currently hold only one seat in the legislature after Kevin Lamoureux's successful transfer to the federal level in last month's Winnipeg North by-election, are up one point to 13%. The Greens are steady at 4%.

It appears that the Progressive Conservatives are losing ground in all parts of the province, but that NDP gains have come only outside of the provincial capital.

The Progressive Conservatives are well ahead among men, and hold a narrow lead over Premier Greg Selinger's New Democrats among women.

But in Winnipeg, the NDP is on top. They've held steady since August at 41%, while the Progressive Conservatives have dropped three points to 39%. The Liberals are up one to 14%.

In the rest of the province, however, the PCs dominate. They've dropped five points but still lead with 54%. The New Democrats are up six to 32%, while Jon Gerrard's Liberals are steady at 11%. 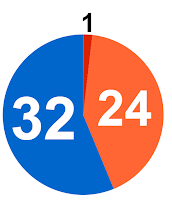 With these poll numbers, the Progressive Conservatives would win a majority government with 32 MLAs, two fewer than my last Angus-Reid projection for Manitoba. The New Democrats have gained those two seats and would win 24 in total. The Liberals would win one seat.

Manitoba's next election is scheduled to be held on October 4, 2011. We could get a taste of things to come before then, if a by-election for Lamoureux's former riding of Inkster takes place.
Posted by Éric at 10:04:00 AM