The new EKOS poll shows that the Conservatives have remained stable over the last two weeks, but also that the Liberals have made some gains at the expense of the New Democrats. 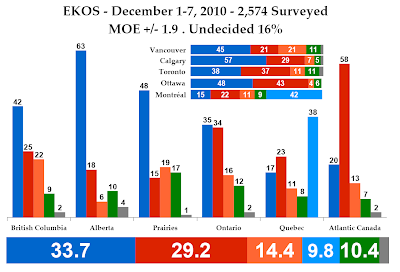 Compared to EKOS's last public poll released two weeks ago, the Conservatives are up only 0.4 points to 33.7%. They did have a dip in EKOS's polling last week, when they were at 32.6%, but this is all oscillation within the MOE.

The Liberals have gained 2.1 points from two weeks ago, and now trail with 29.2%. The gain has come primarily in the last week of polling.

The New Democrats appear to have been sinking throughout the two weeks, and are down 2.2 points to 14.4%.

EKOS uses an automated telephone polling system that manages to include both landlines and cell phones. The percentage of respondents who were undecided was 16%, virtually unchanged from two weeks ago.

The race remains close in Ontario, where the Conservatives have dropped one point but still lead with 35%. The Liberals are down two points to 34.4%, while the New Democrats are steady at 15.9%. The Greens are up three to 12.2%. The Tories lead in both Toronto and Ottawa, with 37.9% and 48%, respectively. The Conservative gain in Toronto may stem from, or be a record of, their by-election win in Vaughan. The Liberals trail (but are statistically tied) in those two cities with 36.9% and 42.6%.

In British Columbia, the Conservatives have finally pulled away from the pack. They've gained six points over the last two weeks and lead with 42%. The Liberals trail with 25.3%, up 10 points, while the NDP is at 21.8%, down seven. The Greens are down five to 8.5%. However, note that in the first week of polling the NDP was leading the Conservatives 35% to 26%, so there is still a lot of polling volatility in the province. In Vancouver, the Conservatives lead with 45%. The NDP is second with 21.4%.

The Liberals score a huge number in Atlantic Canada, at 58.2%. That's a gain of 23 points, and obviously one that is a result of the small sample size and the 95% level of confidence. The Conservatives are second with 20%, down 19 points. The first week of polling had a more typical level of support for the Liberals (36%) and Conservatives (31%), but EKOS did still find the NDP well below 20% in both weeks. 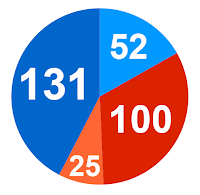 This poll would result in 23 Conservative seats in British Columbia, 27 in Alberta, 23 in the Prairies, 46 in Ontario, seven in Quebec, and four in Atlantic Canada for a total of 131. That is only one more than the projection result of EKOS's last poll two weeks ago.

The Liberals would win nine seats in British Columbia, one in Alberta, one in the Prairies, 45 in Ontario, 15 in Quebec, and 27 in Atlantic Canada for a total of 100. That is eight more than two weeks ago, but the gain is primarily in the improbable Atlantic Canada result.

The Bloc would win 52 seats in Quebec, down one.

The NDP would win four seats in British Columbia, none in Alberta, four in the Prairies, 15 in Ontario, one in Quebec, and one in Atlantic Canada for a total of 25, down eight from two weeks ago. The drop took place mostly in British Columbia.

This poll puts a bit of a damper on the 7 to 11 point leads we've seen from other pollsters like Nanos and Angus-Reid. It also differs in that the Conservative strength is out West, whereas some of the other polls have shown surprisingly good Tory numbers out East.

Will this put out the flames of the rumours that we'll be heading into an election in January? Hard to say - each of the parties conduct their own polling and they probably pay more attention to those (unpublished) results.

Nevertheless, we've been blessed with an abundance of federal polling this week and it appears that no two polls tell the same story. That is a bit of a change from the last few months, where every showed almost the exact same thing. While this could just be methodologies and margins-of-error conflicting with one another, it could also indicate that Canadians are starting to be less sure in their voting intentions.
Posted by Éric at 10:24:00 AM