Since February 2009, I've been averaging out polling results from each month. I've recorded them in a chart that only included the averages at the national level and for Ontario and Quebec. With today being the last year of 2010, it seemed fitting to expand that chart to include all six regions of the country. For simplicity's sake, I've also rounded all of the averages to the nearest full number.

The chart below tells the story of Canadian politics since January 2009. Click on it to see it magnified. 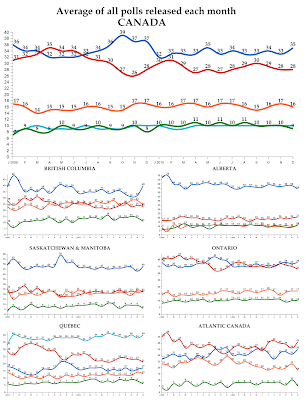 This past year has featured incredible stability. The Conservatives have only fluctuated between 32% and 35%, while the Liberals have been between 27% and 31% and the NDP between 15% and 17%.

But 2009 had huge variations, the Conservatives polling between 32% and 39%, and the Liberals between 26% and 35%. The NDP were relatively stable.

Regionally, the greatest variations appear to have taken place in Ontario, Quebec, and Atlantic Canada.

In Ontario, the Liberals held the lead between January and August 2009, only to lose it and see the Conservatives roar ahead to more than 40% between September and November. Since then, the two parties have been trading the lead back and forth.

In Quebec, the Liberals were very competitive for most of 2009, faltering in October. They even came within three points of the Bloc Québécois in May 2009. The Bloc has been steady, while the Conservatives have also been steady except for the blip in support from October to December 2009.

In Atlantic Canada, the Liberals lost their lead in October 2009, regaining it in January. It was a close race until this past July, but the contest is getting closer again. You can also see that the NDP has fallen away steadily since last December.

I will update this chart regularly. It acts as a great look at how things have been going over the past 24 months.

All the best to you and yours for the next 12 months. I hope the year will bring happiness and success to all!
Posted by Éric at 10:59:00 AM