A poll by Probe Research released before Christmas shows that the Progressive Conservatives have widened the gap between themselves and the governing New Democrats to four points, outside of the poll's margin of error. 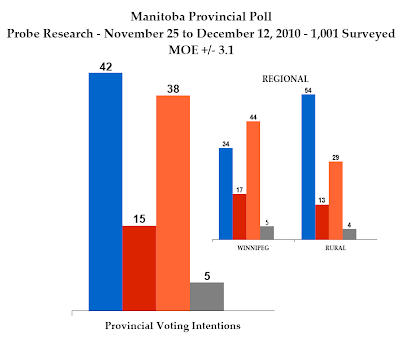 When we last heard from Probe in September, the two parties were in a statistical tie. But the Progressive Conservatives have held steady at 42% since then, while the New Democrats have dropped two points to 38%.

The Liberals gained three points and stand at 15%, while 5% of Manitobans supported an "Other" party in this telephone poll.

The Progressive Conservatives hold the advantage in most demographics: males, voters aged between 18 and 34 and those older than 55, Manitobans of all education levels, and voters who earned more than $60,000 per year. The NDP is tied with the PCs among women and voters between the ages of 35 and 54, while the New Democrats lead among Manitobans who earn less than $60,000 per year.

The Progressive Conservative lead is based mostly on their strength outside of the provincial capital. Up one point since September, the PCs lead with 54%, compared to 29% for the NDP (-3) and 13% for the Liberals (+5).

The New Democrats lead in Winnipeg with 44%, down two from September, while the Progressive Conservatives are down one point to 34%. The Liberals have gained three points in the capital, but still trail well behind at 17%. 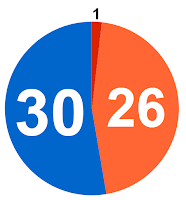 This poll would give the Progressive Conservatives 30 seats and a slim majority government. The New Democrats would win 26 seats while the Liberals would elect only one MLA.

If these close numbers hold throughout 2011, the provincial election next year will be one to watch. The New Democrats have been in power for a long time now but Premier Greg Selinger has yet to demonstrate that he can win an election for his party. Will the Liberals recover from Kevin Lamoureux's departure? Can the Hugh McFadyen's Progressive Conservatives be part of the blue wave that seems to be sweeping over the country at the provincial level?
Posted by Éric at 1:50:00 PM