Canadians up for election, believe it will result in another minority

It appears that the talk of an election in 2011 is not idle chatter among Ottawa politicos who would enjoy the spectacle (i.e., me). A new poll by Angus-Reid shows that Canadians also believe that an election will take place in 2011. And what's more, they seem to be down with it.

Fully 49% of Canadians agree that a federal election should take place in 2011, compared to 34% who disagree. Taking out the "not sures", that puts 59% of decided Canadians in favour of holding an election in 2011. That's quite a bit more than we usually see in these types of polls. Canadians seem to be coming around to the idea of holding an election. It's unlikely they've warmed up to elections themselves, but have grown a little tired of the Parliament that currently exists and the constant speculation and electoral threats. In other words: s**t, or get off the pot.

Rumour is reality for 57% of Canadians, the number of people surveyed who believe that an election in 2011 is likely. For my part, I'm on the fence. There are a lot of indications that an election will take place in 2011, but there were plenty of indications that we were going to go in 2009 and 2010, too. While an election in 2011 would not surprise me, I would also not be surprised if this Parliament passes naturally in 2012.

Angus-Reid also asked respondents what outcome they would prefer, and what they think is most likely. While the results are interesting, they don't tell us anything new: 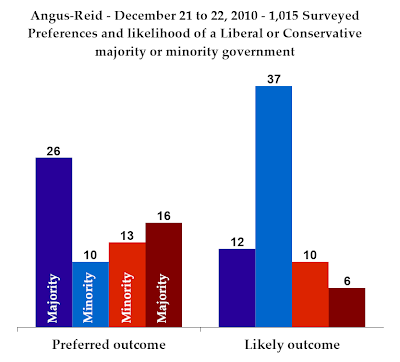 Few Canadians, it seems, want the next election to have the same result as the last.

But these numbers aren't anything that Conservative supporters should be extra happy about. Adding up the two totals gives us 36% who prefer a Conservative government of some kind and 29% who prefer a Liberal government of some kind. That is, generally speaking, where the two parties currently are in voting intentions. The remaining 35% can be easily divided up into NDP, Bloc, and Green voters.

That 42% responded that they preferred a majority government is, I believe, absolutely irrelevant. Those who want a Conservative majority certainly don't want a Liberal majority, and vice-versa.

It takes a little bit out of the argument that Canadians are 1) hoping for a Conservative majority or 2) are very afraid of a coalition government.

However, when the Bloc is entered into the equation, only 25% would be satisfied with the outcome, while 50% would be dissatisfied. Lumping in the Bloc with the coalition appears to make some political sense, but without any cross-tabs we can't know how many of the dissatisfieds are Bloc supporters who chafe at the idea of their party aiding in the governing of Canada and supporting two federalist parties.

The poll sets the stage for a 2011 election. It isn't an idea that turns Canadians off, despite their agreement that after it is all said and done, we'll probably have the exact same outcome as we did in 2008.

There will be no blog update tomorrow, or over the weekend. I should be back next week with some British Columbia and Manitoba provincial polls, as well as some other neat things. Merry Christmas to some of you, and for the rest of you have a good long-weekend-where-everything-is-closed.
Posted by Éric at 10:05:00 AM