BC Liberals and NDP still neck-and-neck

A pre-Christmas poll by Angus-Reid put the BC Liberals and BC New Democrats tied at 38% apiece, an unchanged situation from a poll taken earlier in the month. But the picture appears to be clearer as to who will lead the respective parties in a few months. 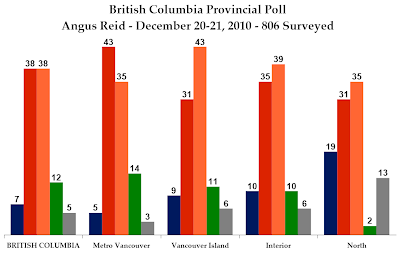 Angus-Reid's last poll in early December put the BC Liberals and BC NDP at 36%, so this represents a growth of two points for each of the parties.

The BC Greens have taken a step back, down two points to 12%, while the BC Conservatives are at 7%, up one.

The BC Liberals lead in and around Vancouver with 43% (+4) to 35% for the NDP (-2). They've lost three points on Vancouver Island and seven in the North, but have gained four in the Interior.

The BC Greens are performing best in and around Vancouver with 14%, up one, while they've dropped eight in the Interior. The BC Conservatives were steady in Vancouver but grew outside of the city, gaining 13 points in the North. 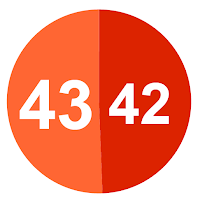 With these regional results, the BC New Democrats would win 43 seats and form the slimmest, almost non-existent majority. The BC Liberals would win 42 seats. A dysfunctional assembly, most likely.

The BC New Democrats would win their seats almost evenly across the province, with 15 in Metro Vancouver, 13 on Vancouver Island, 11 in the Interior, and four in the North.

The BC Liberals would win the bulk (26) of their seats in and around Vancouver, with another 11 seats in the Interior, four in the North, and one on Vancouver Island.

The picture is a little murkier for the BC New Democrats, but Mike Farnworth appears to be the front-runner. He's a "good choice" for 40% of British Columbians (+6) and 49% of New Democratic supporters (also +6). Adrian Dix is the runner-up at 24% and 37%, respectively.

These provincial "good choice" numbers virtually mirror the results of the 2009 election, indicating that Clark and Farnworth could bring things back to square one.
Posted by Éric at 12:04:00 PM