Let's start with the New Democrats. They had a decent month, and improved their range over October's best and worst case scenarios. They are still, however, stuck in a fourth-place spot in the House of Commons.

With 24.1% of the vote, the best case scenario for the NDP is a total of 50 seats. The Conservatives would still end up with the greatest number of seats, with 122. The Liberals would win 85 and the Bloc 51.

The NDP would win 16 seats in British Columbia, one in Alberta, five in the Prairies, 19 in Ontario, two in Quebec, and seven in Atlantic Canada. It would put them in a good position to form a coalition with the Liberals, but together they would still be short of a majority. 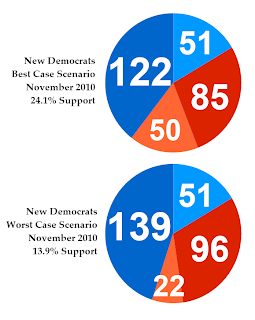 The worst case scenario for the NDP would result in the party earning only 13.9% of the vote and 22 seats, while the Conservatives would form a minority government with 139. The Liberals would win 96 and the Bloc 51 seats.

The NDP would win six seats in British Columbia, none in Alberta, two in the Prairies, 11 in Ontario, one in Quebec, and two in Atlantic Canada.

The Liberal best case scenario is just short of a plurality: 110. The Conservatives, meanwhile, would still win 111 seats. But such a close result would give each party an equal chance at forming government. The NDP would win 36 seats and the Bloc would win 51. 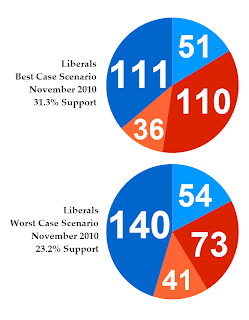 The worst case scenario would be slightly worse than the party's result in 2008. With only 23.2% of the vote, the Liberals would win 73 seats. The Conservatives would still be short of a majority with 140 seats, while the NDP would win 41 and the Bloc 54.

The Liberals would win four seats in British Columbia, none in Alberta, one in the Prairies, 37 in Ontario, 13 in Quebec, and 16 in Atlantic Canada. It would be a bad result for the party, as even the tiniest step backwards from 2008 would be a complete failure.

Now, the Conservatives. Still no majority for them in the cards, as their November best case scenario would only give the party 147 seats. The Liberals would win 85 seats and the NDP 27, while the Bloc would win 49 seats.

With 38.4% of the vote, the Conservatives would win 20 seats in British Columbia, 28 in Alberta, 23 in the Prairies, 54 in Ontario, nine in Quebec, and 12 in Atlantic Canada. It would put the Tories very close to a majority, and so they would likely be able to hang on to power against a weakened NDP and an only marginally larger Liberal caucus, but it would be the same-old situation. 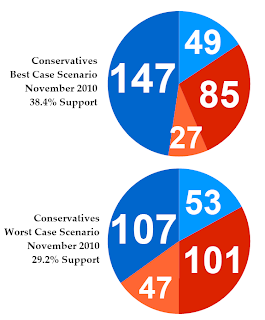 The Conservatives' worst case scenario would result in only 107 seats, but it would still give them a six-seat margin over the Liberals. The Bloc would win 53 seats and the NDP 47. It would be very difficult for the Tories to remain in power with this result.

With 29.2% of the vote, the Conservatives would win 13 seats in British Columbia, 26 in Alberta, 19 in the Prairies, 38 in Ontario, five in Quebec, and five in Atlantic Canada.

The NDP and Liberals have a lot to gain with these numbers - the NDP would win a huge number of seats and have a lot of influence in Parliament, while the Liberals would have a good chance at forming a (weak) minority government. But Michael Ignatieff could also preside over the party's worst-ever performance, while Jack Layton could bring his party back to pre-2004 levels.

I've already crunched the numbers for December, but in case a poll is released between Christmas and the New Year (though that is extremely unlikely), I'll hold off until early January. But from what I've seen, December has been a very bad month for the New Democrats and a very good month for the Conservatives.
Posted by Éric at 12:54:00 PM