Abacus Data has a new poll out, its second national poll, showing that the Conservatives have an 11-point lead over the Liberals. However, compared to their last poll released in early November, there has been little change. 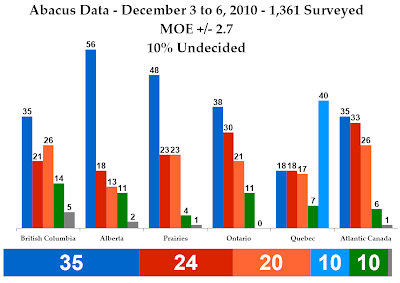 With 35%, the Conservatives are up two points from the last Abacus poll. The Liberals are down one to 24%, their lowest result in my projection, while the New Democrats are also down one, to 20%.

The Bloc Québécois and Greens are at 10%.

About 10% of respondents in this online poll were undecided, a decrease of six points from early November.

The Conservatives have gained two points in Ontario and lead with 38%, followed by the Liberals at 30% (-1). The NDP is at 21% here, unchanged, while the Greens are down one to 11%.

The Bloc is holding steady at 40% in Quebec, while the Liberals and Conservatives are tied at 18%. That is a very low number for the Liberals, and represents a drop of one point. The Conservatives have gained one point, as have the NDP, who stand at 17%.

The Conservatives lead in British Columbia with 35%, an increase of three points. The NDP is at 26%, down nine, while the Liberals are at 21%, unchanged. The Greens have gained three points and are at 14%.

The Conservatives lead in Alberta with 56% and in the Prairies with 48%. In that latter region, the NDP and Liberals are tied at 23%. 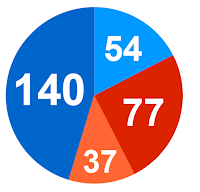 With this poll, the Conservatives would win 19 seats in British Columbia, 26 in Alberta, 21 in the Prairies, 55 in Ontario, seven in Quebec, and 11 in Atlantic Canada for a total of 140. That is an increase of 14 seats compared to Abacus' last poll.

The Liberals would win eight seats in British Columbia, one in Alberta, four in the Prairies, 34 in Ontario, 12 in Quebec, and 16 in Atlantic Canada for a total of 77, down six.

The Bloc would win 54 seats in Quebec, unchanged from Abacus' last poll.

The New Democrats would win nine seats in British Columbia, one in Alberta, three in the Prairies, 17 in Ontario, two in Quebec, and five in Atlantic Canada for a total of 37, down eight.

In other words, the seat totals for all three national parties would virtually mirror their 2008 results. The Conservatives apparently need more than an 11-point lead to get a majority, as was shown in that election. The beneficiary in this poll seems to be the Bloc, as they have taken advantage of Liberal weakness in Quebec to make some gains.

I read a lot of skeptical comments out there about Abacus because they are new and have somewhat different results from other pollsters. But remember that the MOE is about three points, which puts the Liberals, Conservatives, and New Democrats in the range we'd expect them to be. Their regional results aren't too odd, and to their credit Abacus is a little more forthcoming with methodology than some of the other pollsters out there. Warren Kinsella, for example, said Abacus was entering an already crowded field. The fact of the matter is that compared to the United States we have very few active polling companies. I think it is great to be able to add another data set to the pile, and unlike the other national polling companies they waded in to September's New Brunswick election.

Polls like this one and the Nanos poll earlier this week have led some to chatter about a possible January election. I'm not sure I buy it - all parties know that individual polls are just individual polls, and Nanos' results are on the outside edge of what others have shown. The projections for both Nanos and Abacus show that the parties stand to waste a lot of money in order to come to the same result. Sure, a campaign can change things radically but the trends are not favourable to anyone and there really isn't all that much of a pressing need for an election.

With the provincial elections in the Prairies, in Newfoundland & Labrador, and in Ontario scheduled for next fall, and a BC election looking possible at any time next year, there isn't that much of a window for a federal election. It is quite possible that this Parliament will die a natural death in 2012.
Posted by Éric at 9:39:00 AM