Ipsos-Reid released a new poll on Friday, their first since the beginning of November. It shows a big gain for the Conservatives, with the New Democrats taking an equally big step backwards. 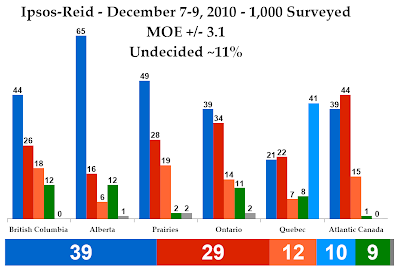 Compared to Ipsos-Reid's last poll, the Conservatives have gained four points and lead with 39%. That is the highest score for the Tories in my model. Meanwhile, the Liberals are steady at 29%.

It is the New Democrats who've lost ground, down four points to a bare 12%, the lowest in my model.

About 11% of respondents in this telephone survey were undecided, virtually unchanged from the last poll.

The breakdown by gender is notable. Ipsos-Reid has Conservative support among males at 47%, a huge number. The Liberals are only at 24%. But among women, the Liberals lead with 33% to the Conservatives' 31%.

There's been little change in Ontario, where the Tories have gained only one point and lead with 39%. The Liberals are unchanged at 34%, while the NDP is down three to 14%. The Greens, meanwhile, are up one to 11%.

In Quebec, the Bloc has gained six points and leads with 41%. The Liberals are down two to 22%, while the Conservatives are up the same amount to 21%. That is a very good result for the Tories in Quebec. The NDP is down four points to 7%, a very bad result.

The Conservatives have gained 10 points in British Columbia and lead with 44%. We've been seeing good Tory numbers in BC lately, so despite the big jump this isn't all that unusual. The Liberals are up three to 26%, while the NDP is down six to 18% and the Greens five to 12%.

The Liberals lead in Atlantic Canada with 44%. The Conservatives are up 11 points here, to 39%.

In Alberta, the Conservatives lead with 65%, followed by the Liberals at 16%, down six.

The Conservatives also lead in the Prairies with 49%, up 10 from early November. The Liberals follow with 28%, while the NDP is down seven to 19%. 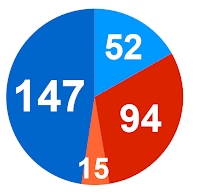 With this poll, the Conservatives would win 25 seats in British Columbia, 28 in Alberta, 20 in the Prairies, 54 in Ontario, nine in Quebec, 10 in Atlantic Canada for a total of 147. That is 13 more than the projection from Ipsos-Reid's last poll.

The Liberals would win nine seats in British Columbia, none in Alberta, six in the Prairies, 41 in Ontario, 14 in Quebec, and 22 in Atlantic Canada for a total of 94. That's three fewer than last time.

The Bloc Québécois would win 52 seats in Quebec, three more than in early November.

The big loser of this poll, the New Democrats, would win only two seats in British Columbia, none in Alberta, two in the Prairies, 11 in Ontario, none in Quebec, and none in Atlantic Canada for a total of only 15 seats, 13 fewer than in Ipsos-Reid's last poll.

It's only one poll, of course, but these Ipsos-Reid numbers give us a look at what a one-on-one contest between the Conservatives and Liberals could be like.

This poll adds further evidence that the recent change we've seen in the numbers, that the Conservatives have moved out of their habitual five-point lead to something more substantial, is real. Growth in Conservatives support in British Columbia and Atlantic Canada in this poll, echoing some of the other polling results we've seen over the last few days, seem to be the cause. Why that is the case, however, is not clear.
Posted by Éric at 10:16:00 PM