Being a party leader puts you in a far more secure position than any other politician standing for election, right? The answer would seem to be an obvious one, but it turns out that a party leader's ability to withstand regional and provincial trends is roughly zero.

As I did recently with my analysis of the effect star candidates can have on a race, I took a look at whether party leaders have an ability to do better than their party as a whole.

For example, if a party's vote from one election to another decreases by a proportion of 10% in a given province, will the vote in a party leader's riding in that province also decrease by 10%, or will they be able to withstand the larger shift taking place around them?

This "party leader factor" was scored as follows: if a party went from 20% to 40% in a province (an increase by a factor of two), we'd expect a party's leader vote in a riding in that province to also increase by a factor of two. But if, say, the vote in the leader's riding went from 30% to 50%, instead of 60%, the leader would be rated at 0.833, as that is the result of 50 (actual electoral result) divided by 60 (expected result).

These calculations would provide a factor that could be plugged into a uniform swing model.

So, here are the results for all the men and women who have led their parties into an election since 1997, with the exceptions of Joe Clark and Stockwell Day as their personal electoral histories did not make these calculations possible: 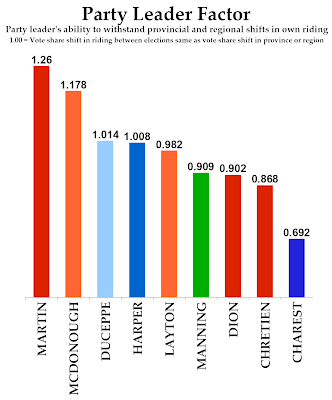 Liberal leader Paul Martin, who led the party in the 2004 and 2006 elections, withstood the wider changes in his province better than anyone else, with a rating of 1.26. Next best was NDP leader Alexa McDonough at 1.178, followed by Bloc leader Gilles Duceppe at 1.014 and Conservative leader Stephen Harper at 1.008.

These four are the only leaders who managed to do better than their parties as a whole. If there is an advantage to being a party leader, these four made full use of it.

So what do we get out of all of this? Is there a "party leader factor"?

The answer seems to be that there isn't.

The NDP had the best average factor of the three national parties, with a rating of 1.08. The Liberals were next at 1.01, while the Conservatives/Progressive Conservatives/Reform were worst with 0.87. If we take the average result of the nine leaders in this analysis, we get an unimpressive 0.979 rating for party leaders.

But if we average out all performances by all leaders since the 1997 election, we get an average factor of 0.999.

In other words, party leaders should expect the vote in their riding to shift at almost the exact same rate as their party's vote shifts in the province or region as a whole.

That means there is no need to add a "party leader factor" to the projection model.

The results of this exercise are surprising, to say the least. But what should come as no surprise is that leaders rarely put themselves at risk of being defeated, standing for election in ridings that are usually among their parties' safest in the country.
Posted by Éric at 3:06:00 PM