UPDATED - BC Liberals pull ahead

The Mustel Group conducted a poll recently for Global Television, reported on as well by the Vancouver Sun. It shows that, after all the turmoil of the HST and the Campbell resignation, the BC Liberals have regained the lead in the province. 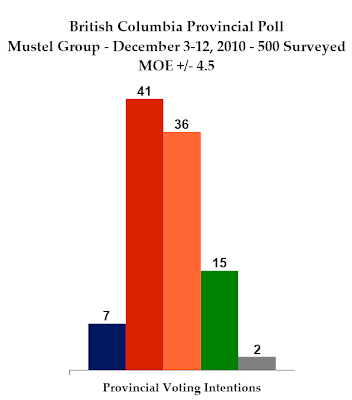 When we last heard from the Mustel Group in mid-November, the BC New Democrats were in the lead. But after a gain of four points since that poll, the BC Liberals are in front with 41%. The BC New Democrats have dropped six points and now trail with 36%. But with the MOE of 4.4 points, it is potentially a very close race.

The BC Greens are up five points to 15%, while the BC Conservatives are down two points to 7% in this telephone poll.

Respondents were also asked about their preferences for the next leader of the BC Liberals. Christy Clark was the favourite among British Columbians as a whole, but also among BC Liberal supporters. Kevin Falcon was second.

UPDATE/CORRECTION: My original seat projection (64 BC Liberals, 20 BC New Democrats, one Independent) posted earlier today was incorrect. Thanks to commenter DL for pointing out that my projection needed to be double-checked. I neglected to change my baseline in my model to province-wide numbers. Instead, I was using the 2009 electoral results from one region as my baseline. My apologies for the error. 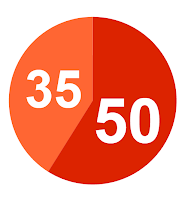 The result of this poll be almost a complete replica of the 2009 electoral result, with the BC Liberals winning 50 seats and the BC New Democrats taking 35. That contrasts greatly with the 52 NDP to 31 Liberal seats that were projected for Mustel's last poll by ThreeHundredEight.

The BC Liberals would win 26 seats in and around Vancouver, 15 in the Interior, five in the North, and four on Vancouver Island.

The BC New Democrats would elect 15 MLAs in and around Vancouver, 10 on Vancouver Island, seven in the Interior, and three in the North.

While polls had originally shown that Gordon Campbell's departure would not have changed the situation much, it appears that either people have changed their minds or the turmoil within the BC New Democrats turned enough people off to give the BC Liberals the advantage once again. But the governing party should beware: if the BC Greens go back to the 8% they got in the 2009 election, the BC New Democrats could be running neck-and-neck with the Liberals again.

We could very well see a provincial election after the leadership campaigns are completed in February and April, so a lot of eyes will remain glued to these numbers over the next few months.
Posted by Éric at 9:27:00 AM