Léger Marketing released some provincial and federal polls today for Quebec. We'll go over both, but start at the provincial level, where there has been some movement. 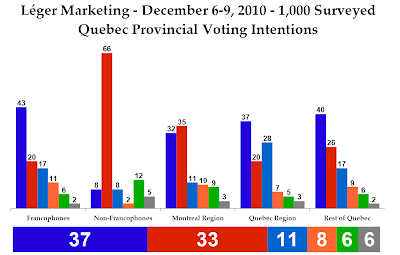 Compared to Léger's last provincial poll taken in early November, the Parti Québécois has dropped only one point, and still leads with 36%. The Liberals are down three points to 30%, while the Action Démocratique du Québec has taken the biggest step forward, gaining four points. They now stand at 15% support.

Québec Solidaire and the Greens are up one point apiece, to 9% and 7% respectively.

The Parti Québécois leads among francophones with 43%, down one point from early November. The Liberals have dropped five points to 20% in this demographic, while the ADQ is up five to 17%.

Among non-francophones, the Liberals dominate with 66%, up two points. The Greens are second with 12%, up three, while the Parti Québécois and ADQ are tied for third with 8%. That is steady for the PQ, but a gain of two points for the ADQ.

Regionally, the Liberals lead in and around Montreal with 35%, down one point. The Parti Québécois is up a point to 32%, while the ADQ is steady at 11%.

Outside of these two cities, the Parti Québécois leads with 40%, down four points from early November. The Liberals have dropped three points to 26%, while the ADQ has taken some big strides forward with an eight-point gain. They now stand at 17%. 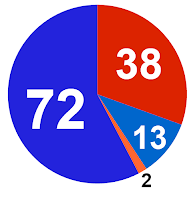 With this poll, the Parti Québécois would win 72 seats, three more than as a result of Léger's last poll. The Liberals would win 38 seats, 11 fewer, while the ADQ would win 13, eight more. Québec Solidaire would win two seats, unchanged from early November.

So, the PQ is still well out in front while the Liberals are trailing, bleeding support to some of the second and third tier parties. The ADQ seems to be benefiting the most, and Deltell could be capable of bringing the party back to the usual support Mario Dumont could command.

Now, to federal politics. Léger's poll doesn't show much change from last time, but that in and of itself is the most significant aspect. 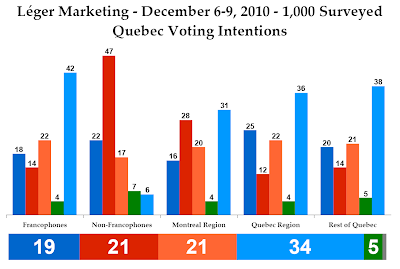 The Bloc Québécois has dropped two points and leads with 34%, a low result for them. The Liberals have dropped one point to 21%, joining the New Democrats who have remained stable.

That the NDP is at 21%, now tied for second in the province, was a remarkable result in early November. It is even more remarkable that the party is still at that high level of support.

The Bloc Québécois leads among francophones with 42%, down one point from Léger's last poll. The New Democrats are second with 22%, up two, while the Conservatives are at 18%, up three points. The Liberals have dropped four points among francophones to only 14%.

Among non-francophones, the Liberals have gained nine points and lead with 47%. The Conservatives are down eight to 22% and the New Democrats are down five to 17%.

In and around Montreal, the Bloc Québécois has gained four points and leads with 31%. The Liberals are up one to 28%, while the NDP is down five to 20%.

The Bloc Québécois has regained the lead in and around Quebec City with a nine point jump. They now lead with 36%. The Conservatives are down two to 25%, while the NDP is up one to 22%.

Outside of the province's two biggest cities, the Bloc Québécois leads with 38%, down 13 points. The NDP is next with 21%, up seven, while the Conservatives are up 10 points to 20%. 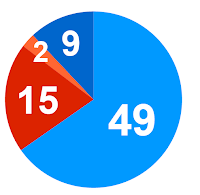 This poll would result in 49 Bloc Québécois seats (two fewer than last time), 15 Liberals, nine Conservatives, and two New Democrats. That is a two-seat gain for the Tories from Léger's previous poll.

While being at 21% is good news for the NDP, their support is too evenly spread out to turn that support into many seats.

The Bloc has high support everywhere, but particularly in the francophone parts of the province. The Liberals are strong in Montreal and particularly among anglophones, guaranteeing them a good chunk of seats. The Conservatives have their pocket of strength in Quebec City and surrounding areas.

The NDP, on the other hand, has almost even support among francophones and anglophones, and is at about 21% in all parts of Quebec. That might put them in a good position to finish a strong third or weak second in most of the province, but it won't put them over the top in many places.
Posted by Éric at 1:57:00 PM