A minority for Stelmach in Alberta

Environics is up with a new Alberta provincial poll, released earlier this month. It shows that the Progressive Conservatives and Wildrose Alliance are neck and neck. 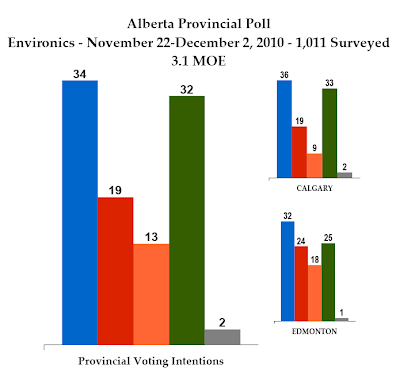 Compared to when we last heard from Environics in May, the Progressive Conservatives have held steady at 34%. The Wildrose Alliance, meanwhile, is up four points to 32%. With a margin of error of 3.1 points, that is a statistical tie.

The Liberals are down four points and are third with 19%, while the New Democrats are up one to 13%.

In Calgary, the Progressive Conservatives are up four points and lead with 36%. The Wildrose Alliance is up two to 33%, while the Liberals are down seven to 19%. The NDP is down one to 9%.

And in the rest of Alberta, the Wildrose Alliance leads with 37%, unchanged from May. The Progressive Conservatives are down four to 33%, the Liberals are up three to 15%, and the NDP is up two to 12%. 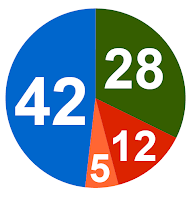 With a more concentrated and organized vote, the Progressive Conservatives would turn this two-point lead into 42 seats. That's three fewer than the projection quoted in the Calgary Herald (not done by me) from May. The Wildrose Alliance would win 28 seats, up 10, while the Liberals would win 12 and the New Democrats five.

The Progressive Conservatives would win 15 seats in Edmonton, six in Calgary, and 21 in the rest of Alberta.

The Wildrose Alliance would win no seats in Edmonton, 16 in Calgary, and 12 in the rest of the province.

The Liberals would win five seats in Edmonton, six in Calgary, and one in the rest of Alberta.

All five NDP seats would be won in Edmonton.

It would mean a minority government in Alberta, something the province has never seen in its history. If Premier Ed Stelmach is thinking of jumping the gun with a 2012 election, as some have suggested, I think this poll will make him think again.
Posted by Éric at 2:28:00 PM