A Probe Research poll conducted for the Winnipeg Free Press shows that, while the Conservatives have remained steady, the Liberals and New Democrats have swapped second and third places. 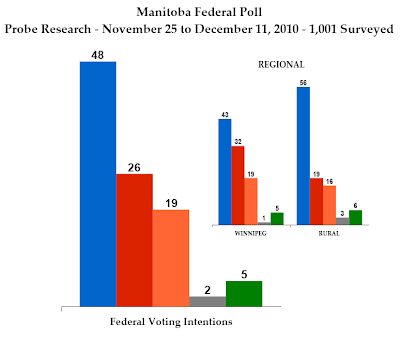 Compared to Probe's federal poll in December 2009, the Conservatives have lost two points but still lead with a healthy 48%. That is only one point less than the party had in the 2008 federal election.

The Greens are down two points from last year and the last election with 5%.

Compared to Probe's last federal poll from September, there has been little change.

The Conservatives are leading in all demographics, as well as in Winnipeg and outside of it.

In the provincial capital, the Conservatives remain unchanged since last year with 43%. The Liberals have made a big gain, jumping eight points to 32%. Note that this poll was taken in the midst of the by-election campaign, so it could be capturing some of the enthusiasm that got Kevin Lamoureux elected in Winnipeg North. The NDP is down seven points to 19% in the city.

Outside of Winnipeg, the Conservatives have a commanding lead with 56%, though that is a drop of three points from a year ago. The Liberals are up two to 19%, while the NDP is up one to 16%.

No one would have guessed it to be the case a few months ago, but Manitoba may just be one of the provinces to watch in the next federal election. Will the Liberals be able to hold on to Winnipeg North? Will they be able to expand their bridgehead in the province? And how will the NDP fare? There are a few potentially interesting story lines to look out for in Manitoba this year.
Posted by Éric at 11:49:00 AM