There was a by-election last night on the Rock. It was held in Conception Bay East - Bell Island, a riding in the northern part of the Avalon Peninsula, due to the death of cabinet minister Dianne Whalen from cancer.

It was never going to have the excitement of the federal and provincial by-elections of this past Monday, as the Progressive Conservatives were expected to easily win the seat. They didn't disappoint, but there was one interesting storyline. 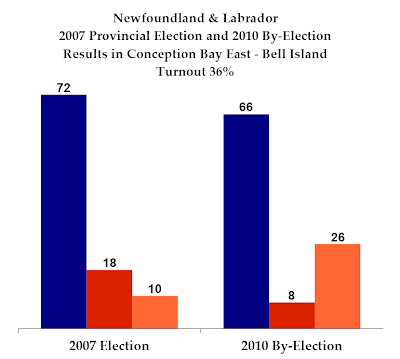 With 66% of the vote, David Brazil of the Progressive Conservatives took the seat very easily, losing only six points from the party's performance in the 2007 provincial election. He lost a little over 1,350 votes, but most of that was due to the lower turnout. CBC reports it was 36%, which is nevertheless better than any of Monday's federal by-elections.

George Murphy of the New Democrats finished second with a very good 26%, increasing his party's vote total by over 470 votes and picking up an extra 16 points. However, Murphy is a former Liberal who left the party very loudly before the by-election. So, it is unknown how many of the votes he pulled to the NDP were due to his Liberal roots. Though the riding has been Progressive Conservative since 2003, it was held by the Liberals from 1985 to 2003. The NDP has traditionally not been a factor in Conception Bay East - Bell Island.

Joy Buckle of the Liberals finished a distant third with 8% of the vote, down 700 votes and 10 points from the 2007 election.

If we had used uniform swing, based on the latest provincial poll, to predict the by-election outcome, we would have ended up with 77% for the Progressive Conservatives, 14% for the Liberals, and 9% for the New Democrats. That would have been a miss, indeed.

As the latest provincial poll from the Corporate Research Associates had the Liberals in second place, well ahead of the NDP, it is very unlikely that this by-election result is a harbinger of Liberal troubles in the 2011 election. Nor is it likely that this six-point PC drop is an indication that people are losing faith in the party after Premier Danny Williams' departure.

If CRA follows its quarterly schedule, we should expect some new Atlantic polling in the next few days. It will be very interesting to see how the fortunes of the Progressive Conservative Party in Newfoundland & Labrador have changed, if at all, after the resignation of their charismatic leader.
Posted by Éric at 9:09:00 AM