Newfoundland & Labrador Premier Danny Williams' approval rating tops the list of Canadian premiers. He is also only one of three premiers (excluding Prince Edward Island) with a performance that meets the approval of a majority of those who have an opinion.

This Angus-Reid poll shows that most premiers in Canada are pretty unpopular. Only Williams and Saskatchewan Premier Brad Wall can be said to have a good approval rating, with 67% and 60% respectively. The premiers of the three largest provinces in the country, meanwhile, are all below 20%.

The following chart shows the approval and disapproval rating of the premiers of Canada's nine largest provinces, after removing those who responded "not sure". While this group was less than 20% of those surveyed in Newfoundland & Labrador, Saskatchewan, Nova Scotia, British Columbia and Quebec, it was over one-third in Manitoba and New Brunswick. 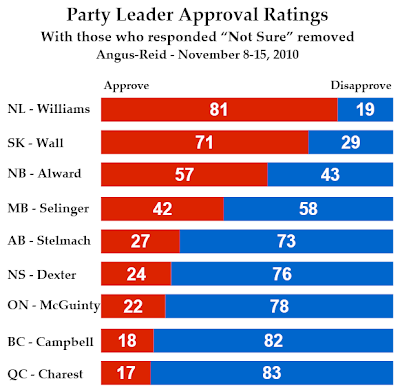 It makes for a pretty sorry picture, with only Williams, Wall, and New Brunswick Premier David Alward over 50%.

Excluding Alward, who was elected as the new premier of the province in September, only two premiers have improved their ratings compared to Angus-Reid's similar survey in November 2009. These are Wall (up two points to 60%) and Alberta Premier Ed Stelmach (up seven points to 21%).

Others have remained relatively stable, with Manitoba Premier Greg Selinger dropping one point (to 28%) and Ontario Premier Dalton McGuinty dropping two points (to 16%).

But some premiers have seen a sharp drop-off in approval over the last 12 months. British Columbia Premier Gordon Campbell is down five points (16%), Quebec Premier Jean Charest is down nine points (14%), Williams is down 11 points (67%), and Nova Scotia Premier Darrell Dexter is down a whopping 23 points (20%).

Of these nine premiers, two are on their way out. Williams resigned last week and Campbell will leave as soon as a new BC Liberal leader is chosen.

While Alward was just elected, Selinger, McGuinty, and Wall will be facing the electorate in 2011, while Newfoundlanders & Labradorians will be choosing a new premier as well. With these ratings, Wall should be comfortably re-elected. Selinger is in a decent position but McGuinty will have his work cut out for him.

Stelmach and Charest have until 2013 to improve their numbers, though it is becoming more and more unlikely that Charest will be around for that election. Dexter has until 2014, so there is plenty of time for him.

Robert Ghiz, Premier of Prince Edward Island, was not included in this survey. The most recent poll from the Corporate Research Associates, taken in August, showed that 45%, or 64% of those decided, thought him to be the best man for the job.
Posted by Éric at 10:01:00 AM