In EKOS's last poll of 2010, the Conservatives and Liberals have both dropped to the benefit of all three of the smaller parties. 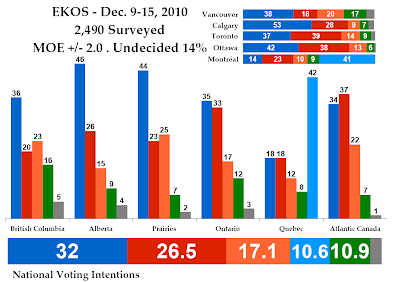 Compared to EKOS's last poll a week ago, the Conservatives have dropped 1.7 points and lead with 32%, similar to what Harris-Decima reported earlier this week. The Liberals, however, are down 2.7 points and trail with 26.5%.

Down two points from a week ago, 14% of respondents in this automated telephone poll were undecided. EKOS reported a week earlier than usual because of the holiday season - we won't hear from them again until after the New Year.

The Conservatives are holding steady in Ontario, and have a narrow lead over the Liberals with 34.6% to 32.9%. That's a drop of one point for Michael Ignatieff's party. The NDP is up one point to 17% while the Greens are steady at 12.4%. The Conservatives lead in Ottawa with 42% to the Liberals' 38%, but are trailing in Toronto at 37% to 39%.

The Conservatives are down six points in British Columbia but still lead with 35.9%. The NDP is up one to 22.8%, while the Liberals are down five to 20.3%. The Greens made the biggest gain, up seven points to 16.4%. The Conservatives lead in Vancouver with 38% to the NDP's 20%.

Undoubtedly due to the small sample size in Atlantic Canada, the Liberals have dropped 21 points to 36.9%. The Conservatives are up 14 to 33.7% while the NDP is up nine to 22%. These are all more along the lines of what we'd expect out East. 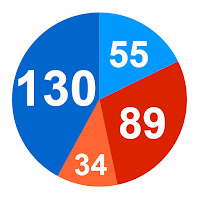 The Conservatives would win 22 seats in British Columbia, 25 seats in Alberta, 20 seats in the Prairies, 46 in Ontario, seven in Quebec, and nine in Atlantic Canada for a total of 130. That's one fewer than the projection for EKOS's last poll.

The Liberals would win seven seats in British Columbia, two in Alberta, four in the Prairies, 43 in Ontario, 12 in Quebec, and 19 in Atlantic Canada for a total of 89. That's 11 fewer than last week.

The Bloc would win 55 seats in Quebec, three more than in EKOS's last poll.

The New Democrats would win seven seats in British Columbia, one in Alberta, four in the Prairies, 17 in Ontario, one in Quebec, and four in Atlantic Canada for a total of 34, nine more than last time.

There are a lot of similarities between this poll and the one released by Harris-Decima earlier this week. For example, the high Green number in BC and the (relatively) closer race in Alberta. It certainly adds fuel to the fire in terms of the debate between whether the Conservative lead has grown or whether it has remained about the same as it has been for most of the year.

I suspect this will be the last poll we'll see in 2010, but I will be updating the site as much as possible during the holidays. I won't lack material as I still owe you all November round-ups for polling results and best/worst case scenarios.

The next year should be very busy, as we'll have four provincial elections (Saskatchewan, Manitoba, Ontario, and Newfoundland & Labrador) and perhaps a federal campaign as well. British Columbia could head to the polls after their leadership races are over, and there are rumours of an early election in Alberta and Prince Edward Island. It'll be a big year.
Posted by Éric at 1:48:00 PM