BC Liberals back in the game

Angus-Reid released a new British Columbia poll recently, indicating that the leadership changes of the BC New Democrats and the BC Liberals have had a huge effect on voting intentions. 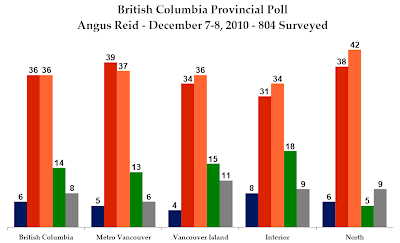 Compared to Angus-Reid's last poll taken just before Gordon Campbell announced his impending resignation, the BC New Democrats have dropped 11 points and are now tied with the BC Liberals at 36%. That is a 10-point gain for the governing party. It's a huge shift in only five weeks.

The BC Greens are up four points to 14%, while the BC Conservatives are down four points to 6%. The departure of Campbell seems to have hit them particularly hard.

Others/Independents are at 8%, up one point in this online panel poll.

On Vancouver Island, the BC NDP has dropped 15 points but still leads with 36%. The BC Liberals are up nine points to 34%, while the BC Greens are up seven points to 15%.

In the Interior, the BC NDP and BC Liberals have swapped 11 points, but the New Democrats still lead with 34% to the Liberals' 31%. The BC Greens are up ten points to 18%, while the BC Conservatives have dropped 10 points to 8%.

Finally, in the North the BC New Democrats lead with 42%, down 15 points. The BC Liberals have gained 12 points and trail with 38%. Other/Independents are third with 9%.

With such a narrow gap in each region, the two main parties are statistically tied throughout British Columbia. 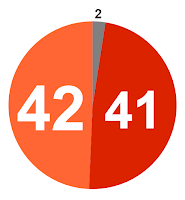 But the BC New Democratic vote is more efficient, and they would win 42 seats. It's only enough for a minority, unless the NDP can attract one of the two independents. The BC Liberals would win 41 seats.

Regionally, the BC New Democrats would win 20 seats in Vancouver, nine on Vancouver Island, nine in the Interior, and four in the North.

The BC Liberals would win 20 seats in Vancouver, five on Vancouver Island, 13 in the Interior, and three in the North.

The two independents would be elected in Vancouver and the North.

Of course, much depends on who the two parties choose as their respective leaders in early 2011. Among voters who cast their ballot for the BC Liberals in 2009, Christy Clark is the best option, as 51% consider her a "good choice". Kevin Falcon follows with 42%, while Mike de Jong (40%) and George Abbott (35%) are not far behind.

Among 2009's BC NDP voters, Mike Farnworth is a "good choice" for 43%. Gregor Robertson gets 35%, Adrian Dix 33%, and Jenny Kwan 29%. It appears that the BC New Democratic leadership race will be more divisive. This should come as no surprise, as internal division is what led Carole James to resign as leader of the party.
Posted by Éric at 9:51:00 AM