The Angus-Reid details are now available. The poll was taken between September 11 and September 13, so it was a weekend poll when news came out that the government could fall on the next Friday.

This is a very good poll for the Conservatives, but another indication that a majority without Quebec is virtually impossible. They have solid leads in British Columbia (41% to 26% NDP and 22% Liberal), Alberta (64% to the Liberal 18%), the Prairies (47% to the 29% Liberal and 14% NDP), and Ontario (41% to the Liberal 29% and the NDP 18%). But they polled very badly in Quebec (13%) and so are projected to win only three seats there with this poll.

The Liberal result in Ontario is disastrous, and would get them only 29 seats. The NDP result of 18%, however, is quite good. The race in Atlantic Canada is heated, with the NDP leading with 34% and the Liberals and Tories tied at 31%.

In Quebec, the Bloc polled well with 40%, as did the Liberals with 36%. The NDP are competitive in Montreal with 10%. 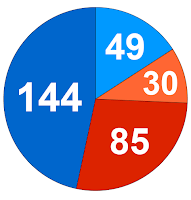 So, we get the following seat totals with this poll:

So this would give a very similar result to what we currently have, but as you can see the Tories are still not in majority territory. They simply can't win a majority without Quebec.

The poll asked whether Canadians support toppling the government. The result was 31% for (strong or moderately so) and 59% against. Interestingly, things were broken down by party as well. Conservative supporters are 6% for and 92% against the toppling of the government, unsurprisingly.

But Liberal supporters are for the toppling of the government, 49% to 44%. As are NDP supporters, 44% to 40%, and Bloc supporters 55% to 35%. While their supporters are divided (and we can't know why they might oppose the toppling of the government, it could be because they don't like their chances), there is definitely nothing here to argue against supporting the upcoming Liberal non-confidence motion. Except, of course, some of the regional polling results.

Canadians are more politically savvy than we think, though, as 77% expect a minority government. As to whether the next governing party will be Conservative or Liberal, 63% think it will be blue and 38% think it will be red. Contrary to the Liberal minority support numbers, this does not bode well.

Don't forget, tomorrow I'll be updating the projection.
Posted by Éric at 12:26:00 PM