More on the AR Poll

Aside from giving the NDP three more points, this Angus-Reid poll is a virtual mirror of the EKOS poll released on Thursday. However, it also isn't much different from an Angus-Reid poll taken between September 11 and September 13. That poll had the Conservatives at 36%, the Liberals at 29%, and the NDP at 17%.

Regionally, there are a few interesting spots. British Columbia isn't one of them, as the results are within what we've seen lately. The Conservatives lead at 37%, which is weak for them, with the Liberals (26%) and NDP (23%) behind. The Greens posted 14%, a good result.

Alberta has the Liberals and NDP at strong 18% and 17% results, respectively. The Tories lead with 61%. The Prairies is another one within the norm, with the Conservatives at 47%, the Liberals at 22%, and the NDP at 18%.

Ontario, Quebec, and Atlantic Canada are of interest, however. In Ontario, the Conservatives have an amazing 14-point lead. They're at 44%, with the Liberals at 30%. This puts the Tories two points higher than the EKOS poll, not out of the ordinary, but the Liberals five points lower. The NDP are at 15% and the Greens 10%.

In Quebec, the Bloc leads with 35%, slightly down. The Liberals are at 26%, also slightly down. The Conservatives had 21%, one of their highest results since the election - and it actually matches their 2008 election result. The NDP are relatively strong as well at 12%. 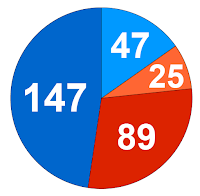 Suffice to say, 37% in British Columbia, 21% in Quebec, and 22% in Atlantic Canada is not enough to give the Tories a majority - but they're close.

The poll also had leadership questions. On who would make the best Prime Minister, Stephen Harper led with 27%, followed by Michael Ignatieff at 16% and Jack Layton at 12%. "None of these" got 22%. This pushes Harper's "Best PM" number on this site down one to 30%. Ignatieff is down three to 19% and Layton down one to 12%.

On the economy, Harper was considered best to manage it with 33%. Ignatieff was second with 23% and Layton third with 9%. Gilles Duceppe got 6%.

Ignatieff, however, gets top marks for foreign affairs. This is perhaps a result of his advertisements talking about India and China and his recent foreign policy speech. He received 30% on this issue, compared to Harper at 28% and Layton at 6%.