Harris-Decima has released a new poll, and thanks to the Toronto Star for publishing the results in full.

Once again, Harris-Decima provides us with a poll to counter a suspicious Ipsos-Reid poll. I wonder what kind of inter-pollster rivalries exist.

In British Columbia, the Tories have a solid lead with 36%. The Liberals and NDP are tied at 23% and the Greens have a strong 17%. Alberta is as you'd expect, but in the Prairies the Tories are at 45% and the NDP is second at 35%, with the Liberals in third at 18%. That is a very strong result for the NDP.

In Ontario, the Tories don't have the 10-point lead Ipsos-Reid gave them. Instead, the Liberals are ahead three points, 38% to 35%. The NDP is alright at 15%.

In Quebec, the Bloc is doing well with 39%. The Liberals are doing good too, with 30%. The Conservatives are at 16% but the NDP has fallen to 7%, just one point above the Greens. How much is Thomas Mulcair worth to the NDP? 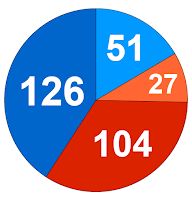 So, something similar to the 2006 result. Significantly, the Liberals and the NDP could out-vote the Tories.
Posted by Éric at 1:45:00 PM