Sparked by a post on another blog, I thought I'd look at how efficient the parties have been with their votes over the last three elections. The results may surprise you. 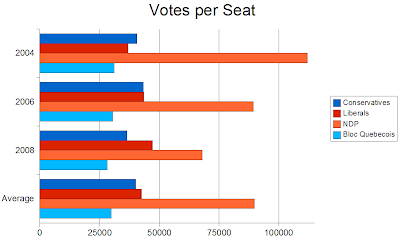 The most efficient use of votes over the last three years has been the Bloc Quebecois. This is not the surprise, as they win in almost all of the seats they are competitive in. The seats they lose, in the Outaouais and in Montreal, give very small Bloc results, meaning they rarely have a large pool of Bloc supporters without a Bloc MP. On average, about 29,900 votes are required to give the Bloc one seat. It is interesting to note that the Bloc has become more efficient over the last three years. In 2004 it took about 31,100 votes to give them one seat. In 2006 it was about 30,500, and last year it was a mere 28,200 votes. In all three years, the Bloc was by far the most efficient.

The NDP is the worst of the four parties in terms of vote efficiency, averaging 89,800 votes for every seat over the last three elections. But, things are improving for them. From a high of 112,000 votes for every seat in 2004, the NDP forced that down to 89,300 votes per seat in 2006 and 68,000 votes in 2008. It is still a very inefficient use of votes - but that is to be expected from a pan-Canadian party that only wins in a few regions.

It goes without saying that the Green Party has been the worst use of a vote over the last three years. In 2004, 582,247 votes weren't enough to give the party one seat. In 2006, 664,068 votes couldn't give them one seat, and last year 937,613 votes weren't enough. That is a remarkable growth in support, but will we see the Greens win one million votes, or even more votes than the Bloc Quebecois, without a seat win? I'd say there is a good chance of that.

So, what can we take from this? It shows that Bloc support is about three times as potent as NDP support, so that for the Bloc to have 8% support nationally is as good as the NDP having 24%. It also shows that a tie between the two major parties is a tie in terms of seats, but as it stands the Conservatives are in a better spot than the Liberals. They can win a few more seats with an equal amount of votes. So for the Liberals to have a hope of forming government, they need to have a one or two point lead over the Tories nationally. The Conservatives, on the other hand, could potentially win an election with fewer votes than the Liberals. That is why, with a mere 0.4-point national lead, the Tories are currently projected to win the most amount of seats.
Posted by Éric at 9:30:00 AM