Canwest mis-reported one of the numbers, that of the British Columbia result. The Tories have a significant lead there, 46% to 26%. The NDP is down to 14% and the Greens are at 13%.

In the Prairies, the NDP is at 21%, tied with the Liberals at 23%. In Ontario, Jack Layton's troops earned only 10% support, a disastrous result. In Quebec, the Conservatives are still way down at 14%, with the NDP at 12% and the Greens at 9%. In Atlantic Canada, the NDP is still in the game, but almost out, at 22%. 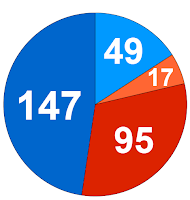 That's right, this still isn't enough to get the Tories to a majority. The NDP is simply too weak to split the vote effectively, allowing the Liberals to grow their caucus and keep the Conservatives to a minority.

If Stephen Harper thinks he can win a majority without Quebec, he is gravely mistaken. With only five seats in the province, he is eight-away from a governing majority. And with Liberal support so solid in Toronto, the Conservatives hit a wall pretty quickly in Ontario.

Nanos Research released a leadership poll, with rough numbers for Ignatieff. However, compared to the Liberal leader's standing in April, there hasn't been much change. Virtually all of the movements for all of the leaders is within the 3.1-point margin of error. The one that is outside of the MOE is on the issue of trust, where Ignatieff has fallen five points from 19% to 14%. Harper improved from 28% to 31%. Ignatieff fell three points on competenece (23% to 20%) and on having a vision for Canada (23% to 20%). Harper gained two points on those issues.

It is worth noting that out of all the parties, Liberals were most likely to identify a different party's leader as more trustworthy, competent, or visionary.

I hope that political leaders don't take individual polls at face value. Polls are useful when taken as a whole, which is the point of this site. If they do, Layton will probably consider his decision to support the government as the right one. However, my own personal reaction is that if a party is perceived to be trying to save its own skin above all else, it does not help. NDP supporters were among those who most supported an election - so we won't see them thankful that their leader has avoided one. In fact, this electorate is least likely to see the propping up of the Harper government as a positive thing. The NDP's only hope is that centre-left voters who support the Liberals but do not want an election will move to Layton in gratitude.

Alienating your own committed supporters, those who work the phones and get out the vote, however, can be a disastrous electoral strategy.
Posted by Éric at 9:25:00 AM