Back in August, I took a look at the polling trends in the Prairies. Now it's time to look at the province that occupies the most space in Canadian politics, Ontario.

Ontario has seen a great swing in support over the last three elections. We all remember the 2000 election when the Liberals under Jean Chretien swept the province and took 100 out of the (then) 103 seats in the province. That kind of Liberal dominance is a thing of the past, and Ontario is now the political battleground in Canada.

Back in 2004, however, Ontario was still a deep Liberal red. Under Paul Martin the Grits took 75 seats and 44.7% of the vote, beating out Stephen Harper's new Conservative Party's result of 24 seats and 31.5%. The New Democrats took 18.1% of the vote and seven seats, while Green support was 4.4%.

In 2008 support flip-flopped, and the Conservatives pulled out in front with 39.2% and 51 seats. Stéphane Dion's Liberals faltered, winning only 38 seats and 33.8% of the vote. Jack Layton continued to improve his seat totals, with 17, but his support level dipped to 18.2%. The Greens did much better in this election, with 8%.

Ontario does have a regional political divide, with the Liberals winning in urban areas and the Conservatives in rural parts.

The Conservatives dominate in Eastern Ontario, where they've won six of the seven seats the last two elections, and five in 2004. The Liberals took the rest, with Peter Milliken of Kingston being the only hold-out. They also do well north of Toronto, where last year they swept all eleven seats in central Ontario. They took 10 in 2006 and seven in 2004, the Liberals getting the rest.

The Liberal stronghold is in and around Toronto. East of the city around Markham and Oshawa the contest is getting close, but in 2004 and 2006 the Liberals dominated. They took seven of the nine seats in 2006 and eight in 2004, with the Conservatives winning the rest. Last year, however, the Liberals took five of the seats and the Tories took four.

In Toronto itself and west of the city (Mississauga, Oakville region), the Liberals are the only party. In Toronto they've taken almost all of the seats - 20 in 2008, 19 in 2006, and 21 in 2004. The other seats went to the NDP - two in 2008, three in 2006, and one in 2004. Layton has held his seat in the city for the last three elections. West of Toronto, the Tories made their first breakthrough last year when they won two seats. The Liberals took the other seven and in the two previous elections they took all nine.

The rest of the province is a bit of a toss-up.

Ottawa has become a bit of a battleground of late, with the Tories winning four seats, the Liberals two, and the NDP one over the last two elections. In 2004 the Liberals took four to the Tory two. Paul Dewar, in Ottawa Centre, is the lone NDP MP.

The stretch of Ontario running from Hamilton to Niagara is another battlefield, though for the last two elections the Conservatives have held the advantage. They won six seats over those elections, but won only two in 2004. The Liberals took seven that year, dropped to one in 2006, and were shutout in 2004. The NDP wins seats in Hamilton, taking four last year, three in 2006, and one in 2004.

Finally, northern Ontario has gone from being a Liberal bastion to an NDP playground. In 2004, the Liberals took eight seats to the NDP two. In 2006 the Tories took one seat while the Liberals kept seven and the NDP their two. Then last year there was a change of fortunes, as the NDP won seven seats, the Tories took two, and the Liberals only one. This was one of the breakthrough regions for the NDP.

Ontario, with its regional variations and large population, is difficult to look at as a whole. But we can give it a shot. 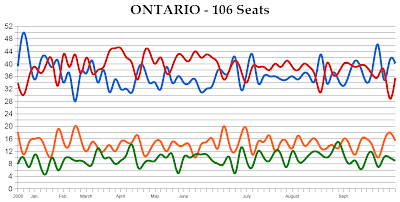 Thanks to the large sample sizes in Ontario, the province provides the most consistent results in the country.

The race is clearly two-tiered. On the one hand we have the NDP and the Greens fighting it out for third place and on the other we have the Conservatives and the Liberals in a death grip for supremacy. The party that wins Ontario forms government, so this is an extraordinarily important battle.

That seems to have changed matters, and the Tories and Liberals were tied in the province until early July, when the Liberals pulled ahead by only a couple of points (39% to 36% or so). They kept that small lead consistently through to the first weeks of August, when the race again became tight between the two parties.

From the middle of August to today, the Liberals and Conservatives have been exchanging the lead in the province. But the trend appears to be downward for the Liberals while the Tories remain relatively stable with a slight uptick.

I currently project 38.2% and 51 seats for the Liberals compared to 36.3% and 44 seats for the Conservatives. But with the trends the way they are, the Tories look to be in a better position and could overtake the Liberals in the coming weeks.

As for the other race, it is more of a moral one. The NDP will still win at least 10 seats in the province while the Greens will almost certainly not win any. But while the NDP has kept the lead over the Greens for almost the entire year, there have been individual polls which put Elizabeth May's party ahead of Jack Layton.

There is little variation in the NDP results. They've consistently polled between 10% and 20%, and we can find both of those highs and lows during virtually any period of 2009.

The same goes for the Greens, who have been between 5% and 15%. They did seem to have some better results in July and especially August, but they've tailed off since.

I currently project 15.1% and 11 seats for the NDP, which would be quite a low for them. However, they've established enough roots in parts of the province to ensure they can maintain themselves in double-digits of seats despite a drop in popular support.

The Greens are projected at 9.9% but no seats. If the party reaches double-digits in this province, that would be a tremendous moral victory.

As for what to do in the province, every party has a lot of work. The Liberals have re-gained a lot of ground, but they need to do more. They will not win enough seats in the West to get them into government if they do not win more than 60 seats in Ontario. More than anywhere else, people in this province have a history of voting Liberal and so it is not unreasonable to expect them to do so again. Michael Ignatieff has to push the party out of the boundaries of Toronto and towards Windsor, Niagara, and North Bay. They could eke out a seat or two in Ottawa and win back Don Boudria's riding in Glengarry-Prescott-Russell. But this is where the work needs to be done for the Grits.

The Tories need to hold what they have. It is extremely unlikely that the Tories will find themselves with a majority after the next election, but if they can win more than 135 seats it will be as good as having one, since it will buy them at least two years without an election. They thus need to hold on to what they have in the province, as they are likely to lose some ground in Quebec and British Columbia.

The NDP need to claw their back to credibility in the province, and maintain what they have in Windsor, Hamilton, and the North. The latter is especially important if Layton wants to demonstrate that 2008 was not a flash in the pan.

As always, Ontario will be the centre of attention on election night.
Posted by Éric at 9:37:00 AM