EKOS has released its weekly poll, taken between September 2 and September 8 and involving 2,825 Canadians. The national results:

This is generally what we've been seeing lately, a 3-5 point spread between the Liberals and the Conservatives. While both would prefer better results, these are both good (or good enough) for both parties. The Tories are happy to go into an election with a lead, while the Liberals should be fine going into an election within reach of the Tories. Remember that in 2004 and 2006, where the minority governments were small, the spread was 6-7 points.

In Quebec, the Bloc is doing well at 39.8%. This gives an element of truth to the Strategic Counsel poll putting the Bloc at 49%. The truth isn't in the number, but in the fact that the Bloc is rebounding in the province. The Liberals are slightly lower than they'd like to be at 27.8%, the Conservatives risk losing many of their seats at 15.5%, and Thomas Mulcair could be looking for a new job with the NDP at 9.8%.

In Atlantic Canada, the Conservatives seem to have made a race of it, statistically tied with the Liberals at 31.0% to 32.2%. The NDP, at 26.5%, are in a decent position. 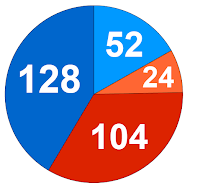 Note that the NDP and Liberals would have as many seats as the Conservatives, making the choice of the Speaker very, very, important.

The poll also asked whether people wanted an election now, or later. Unsurprisingly, the result was 28% now and 72% later. That 28% is actually pretty high, but really, why do we ask this question? People never want an election. Poll after poll shows that Canadians don't like politicians in the first place.

There was no major variation in terms of regional preferences, though British Columbia and Quebec were at 32% and 30% for an election, respectively.

Young people seem to want an election, with 44% of those under the age of 25 wanting an election now.

The projection will be updated later today. I'm hoping I'll have the rest of the Harris-Decima poll before doing so.
Posted by Éric at 9:06:00 AM