Léger Marketing has released a new poll this morning, taken between September 22 and September 25 and involving 3,602 interviews. So, it's a pretty big poll, the biggest we've seen in a little while.

This just further confirms the findings of EKOS and Angus-Reid, though shows that the NDP are probably not in as bad a spot as EKOS had them.

In British Columbia, the Tories lead with 39% followed by the Liberals at 26% and the NDP at 21%. The Greens are at 13%. The Conservative result is slightly better than what we've been seeing lately, as is the Liberal result. At 21%, the NDP would be disappointed.

In Alberta, the Conservatives are way ahead at 68% with the Liberals at 14% and the NDP at 9%. The Prairies also show a big Tory lead, 51% to the Liberal 23% and NDP 17%. Nothing out of the ordinary, but the NDP needs to do better in the Prairies.

In Ontario, the lead isn't as massive as we've seen from Angus-Reid. The Conservatives lead with 40%. The Liberals are at 34% and the NDP at 17% - a good number for them, but a bad one for the Liberals. This is 2008 all over again.

In Quebec, the Bloc polled a weak 33%, while the Liberals were at 30% and the Conservatives at 17%. The NDP, at 14%, is doing well. The Bloc still takes the bulk of the seats, however, because of how the vote breaks down in the province. 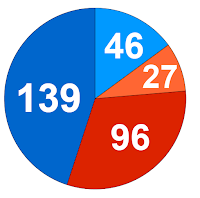 Far from majority territory, but still outside of the combined totals of the Liberals and the NDP.

The poll also had some other topics. Stephen Harper is the best Prime Minister for 32%, while Michael Ignatieff is the choice of 21% and Jack Layton 18%. That bumps up this site's "Best PM" track by two points for Harper (now at 32%), one point for Ignatieff (now at 20%), and two points for Layton (now at 14%). In the battleground provinces, the result was 30-22-18 in British Columbia and 36-20-16 in Ontario. But in Quebec, Layton was first with 26%, followed by Ignatieff at 25% and Harper at 19%. But to paraphrase (and tweak) Chantal Hébert in the Toronto Star today, just because Quebecers like Layton as Prime Minister doesn't mean they'll leave the Bloc.

42% of Canadians think the government should change compared to 46% who think it should not. Minority governments are a net negative for 45% of Canadians, while 38% think they are positive.

Some interesting polling data overall, but nothing surprising.
Posted by Éric at 10:47:00 AM