The polling firm headlines the poll saying that the Tories have the most committed voters. On a scale of 0-6, the Conservatives average a 3.5 level of commitment, while the Liberals are at 3.2, NDP 3.0, and Greens 2.7.

The Bloc's level of commitment is 3.6, more than the Tories, but apparently they aren't real voters.

Anyway, here are the national results:

The NDP result is pretty horrible for them, and they posted the biggest loss with 2.7 points. The Greens seem to have benefited, rising 1.2 points.

The regionals are very good for the Conservatives, though they are still struggling in British Columbia. They lead, but with only 34.2%. The NDP and the Liberals are tied at 24.1% and the Greens posted an excellent 17.6% result.

Alberta is what you'd expect, but the Liberals had a good 19.1% result there. In the Prairies, the Tories lead at 41.8%, followed by the NDP at 23.8% and the Liberals at 20.7%. Below average results for the two major parties, and a decent result for the NDP.

Ontario is the biggest news from this poll, however. The Tories lead with 41.8% - a huge result. The Liberals follow at 35.1%, still better than 2008, and the NDP and Greens are in the basement at 11.9% and 11.2%, respectively. Something struck me as odd about the Ontario poll, however. The sample size in "Toronto" represents only 27% of the provincial sample, which puts them somewhere between the "City" and "Urban" population designation on Wikipedia. Fair enough, but Ottawa represents 15% of the provincial sample, or the equivalent of almost 2,000,000 people. Without Gatineau, Ottawa is only about 800,000 people. And the Tories polled at 55% to the Liberal 28% in the federal capital. This leads me to believe that the Conservative result in Ontario isn't as high as 41.8%. (No longer a concern, see below) 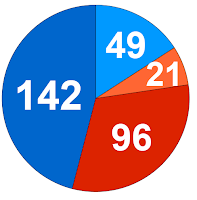 Still no majority. The Conservatives can't win a majority with such weak (relatively speaking) results in Atlantic Canada, Quebec, and especially British Columbia. The Liberals would, in this situation, rebuild their caucus at the expense of the NDP.

The Conservatives lead in all demographics except those under the age of 25 and among university graduates. The Bloc leads in Montreal.

The Conservatives will be very pleased with this poll, but it only gets them exactly where they are right now. The Liberals would be back to 2006 levels, but the NDP would take a huge hit. They've apparently been the ones who were hurt the most by the recent events in Ottawa, which isn't too surprising.

This doesn't make Jack Layton any more likely to support the Liberal non-confidence motion (which, La Presse reports, will be worded very simply - "We have no confidence in this government").

I'll have a projection update later today or tomorrow.

11:14 UPDATE - EKOS has kindly responded to my questions (and multiple follow-ups) concerning the Ottawa sample. While they have over-sampled the capital, it's weight is adjusted within the provincial and national contexts to give it the proper proportion. So all is well, and thanks to the people at EKOS for being so helpful.
Posted by Éric at 8:29:00 AM