Angus-Reid released a new poll today, the first to be taken solely in the current "election imminent" atmosphere. It was taken on September 1 and September 2 and involved 1,007 Canadians. The national results:

What is interesting is that Angus-Reid released a poll last week taken between August 25 and August 26, or just before the election possibilities came about. Compared to that poll, the Tories are down one point, the Greens down two, the NDP and Bloc up one each, and the Liberals up two. All within the margins of error, but if Canadians were truly upset at the opposition for putting us into another election, we wouldn't see the opposition parties increase their support. We shouldn't even see them maintain their support within the margin of error.

The regionals are strikingly similar to the EKOS poll released this morning, but there is some variation. The Conservatives and NDP are in a dead heat in British Columbia with 34% and 33%, respectively. The Liberals round up third at 24%, while the Greens have a surprisingly low 9%.

In Alberta, the Liberals did well in this poll (much like EKOS), with 22%. The Tories are in front with 49% and the NDP in third with 16% - a very strong result.

The Prairies have the NDP at an astounding 35%, behind the Tories at 51% and ahead of the Liberals at 12%. However, taking the margin of error into account, these numbers aren't dissimilar from EKOS's this morning.

In Quebec, very similar numbers to EKOS. The Bloc leads with 35% and the Liberals are second with 31%. The Conservatives are doing alright at 18%, and the NDP could potentially keep Outremont with 10%.

In Atlantic Canada, the Liberals have a solid lead with 39%, followed by the NDP at 29% and the Tories at 28%. 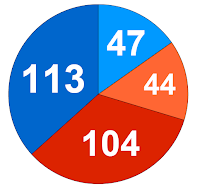 This is a terrific poll for the NDP, and puts them at their highest seat total in history, almost enough to surpass the Bloc Quebecois for third. With 148 seats between them, Ignatieff and Layton could easily work out a governing arrangement.

The poll asked some other questions. Firstly, 32% are for the toppling of the government by the opposition, compared to 57% who are against. But it should be noted that 16% of those against are only 'moderately' so, which can be taken to mean it isn't all that big of a deal to them. In that context, only 41% are really against this while 48% are for it or don't care much. Only in Atlantic Canada, however, were people for the toppling of the government more than they were against it.

It should be noted that Liberal, NDP, and Bloc supporters were in favour of toppling the government.

However, while Canadians don't seem to like the idea of having to go to an election, they agree that it is time for a change. This is, I think, extremely significant, and tells me that playing up the "Canadians don't want an election, this is political gamesmanship" line won't work much. 42% of Canadians believe it is time for a change in government, compared to 34% who believe the Conservatives deserve re-election.

As to whether the government deserves credit for the recession coming to an end, only 31% said that they deserved all or some of the credit. A whopping 61% said they deserved little to no credit. This demonstrates that the Tories should be careful not to play up too much the idea that they got the country out of the recession. Opinion is the same in British Columbia, while in Ontario 33% believe the government deserves some or all of the credit compared to 59% who believe they deserve little or none. In Quebec, the split is 27% to 59%. In short, Canadians more or less believe that the economy is not in the hands of the federal government alone, or even in large part.

This poll will not scare anyone away from an election. With the two Angus-Reid and EKOS polls today, I see the Liberals and NDP hardening their lines further.

On a personal note, thanks for making today the day that ThreeHundredEight.com received the most traffic since I launched the site a little less than one year ago. This bodes well for the coming election!
Posted by Éric at 10:55:00 PM