It was taken between August 26 and September 1 and involved 2,118 Canadians. Michael Ignatieff's decision to oppose the Harper government came on September 1, and there was plenty of go-or-no-go talk for the two days previous, so this poll does include the potential of an election.

It's a dead heat! It can't be any closer than this. This will certainly not dissuade the Liberals from going, and the relatively strong 16.5% for the NDP won't make them support a government they've never supported before. The only stumbling block is the, well, Bloc. This is a weak result for them, but I think Gilles Duceppe is a savvy enough party leader that he is confident in his ability to win a campaign.

In Alberta, the Conservatives have a relatively low 55.4% support, thanks to the very high 25.7% support of the Liberals. This makes them competitive in several ridings. At 10.8%, however, the NDP could be booted out of the province.

In Ontario, the Liberals have opened up a significant lead, erasing last week's 37%-37% tie. This, more than anything, will tell the Liberals they are making the right decision. They lead with 40.4%, well ahead of the Conservatives at 33.1%. The NDP is at 15.6%, which isn't good but is better than some of the numbers we've seen here. 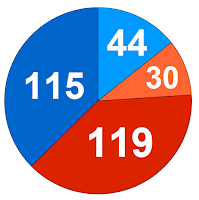 This poll would result in the slimmest of Liberal minorities:

With the support of the NDP, and a Bloc that would want to lick its wounds, they would be able to govern.

I'm going to have a projection update later today.
Posted by Éric at 9:06:00 AM