BC NDP Continue to Lead, Though Gap Closes

On March 19, Angus-Reid released a new poll for provincial politics in British Columbia. 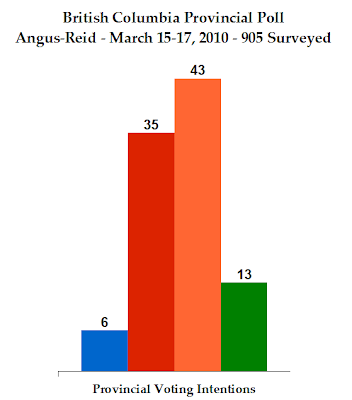 The BC New Democrats under Carole James have maintained their lead with 43%, though this is a drop of four points since AR's last poll in November 2009. Gordon Campbell's BC Liberals have gained two points but are still behind with 35%.

The NDP lead in all demographics, be it gender, age, income, and education - except one. Among people with an income of $100,000 or more, the Liberals have a solid lead.

The BC Greens are up three points to 13%, while the BC Conservatives are down one point to 6%.

As compared to the election in 2009, the NDP is up one, the Liberals are down 11, the Greens are up five, and the Conservatives are up four.

In the BC Interior, the race is much closer with the NDP and Liberals tied at 36%. But in the North, the BC Liberals are well ahead with 43% to the NDP's 28%. This is the strongest region for the BC Conservatives, who are at 18%.

Unfortunately for federal politics, the provincial scene in British Columbia is too different to draw any comparisons. However, while both Harper (since they share a lot of voters) and Ignatieff (since they share a name) can talk nice with Campbell if they deem it politically useful, only the NDP can truly "claim" Carole James and the BC NDP. That would seem to work to their advantage, but the good graces of the BC NDP doesn't seem to be rubbing off on the federal NDP, as they are struggling in third behind the federal Conservatives and the Liberals in the latest polls.
Posted by Éric at 9:22:00 AM