Selinger Still Ahead in Manitoba

A new poll by Probe Research shows that Premier Greg Selinger and the NDP are still in front in Manitoba. 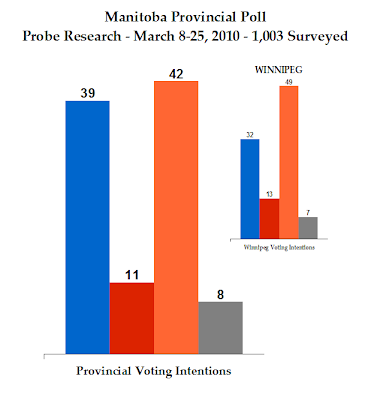 When we last saw a poll from Manitoba, it was from Angus-Reid and was taken throughout February, and the Progressive Conservatives had the lead. Either these two pollsters have found very different results, or the NDP has moved back in front.

As compared to Probe's last poll in December, the New Democrats are down five points to 42%. Hugh McFadyen's PCs are up two points to 39%, while the Liberals are steady at 11%.

Interestingly, Probe split up the results before and after the provincial budget dropped last week. Prior to the budget, the NDP led the PCs 44% to 37%. After the budget, the two parties were tied at 41%. Considering the sample size (roughly 500 each), it could be statistical noise. Or, it could be a worrying trend for the NDP.

The big factor in determining voter support in Manitoba seems to be gender. While the Progressive Conservatives lead among men, 45% to 36% (the NDP has dropped 9 points among men since December), the NDP leads among women, 49% to 33%.

Aside from among men, the NDP leads all demographics. However, the gap is close among 35-54 year olds, high school graduates, and those that make more than $30,000 per year.

In Winnipeg, where elections are often decided as the city represents about half of the seats in the legislature, the NDP has a solid lead, 49% to 32%. The Liberals followed with 13%.

Outside of Winnipeg, the PCs have a solid lead, 51% to 32%. Unlike in Winnipeg, where the changes since December have been small, the NDP has dropped seven points outside of the provincial capital.

When we compare these results to the 2007 provincial election, we see that voting behaviour has not changed much. The NDP had 48% in that election, while the Progressive Conservatives had 38% and the Liberals 13%. Aside from the six-point drop for the NDP, these are all within the MOE. In Winnipeg, things also haven't changed much, and are certainly within the MOE. So, Greg Selinger would still likely form government if an election were held today (though we shouldn't expect one before 2011), but the 36-to-19 majority Gary Doer handed to him would probably be significantly reduced.
Posted by Éric at 9:15:00 AM