EKOS is on schedule with its weekly poll. A little movement, but nothing significant. 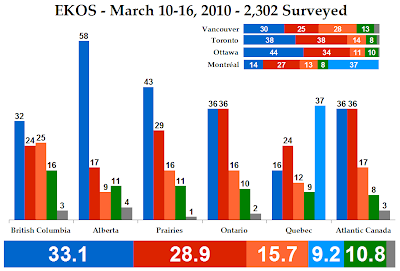 In Quebec, the Bloc Quebecois is comfortably ahead with 36.8%, followed by the Liberals at 24.2% and the Conservatives at 16.3%. All of these results are slightly lower than where the parties want to be.

The only movement outside of the MOE in any of the regional results comes in Alberta, where the Tories have gained eight points and stand at 58.2%. A Conservative lead in Atlantic Canada (only 0.4 points with a 7.8 MOE) is an oddity.

In the cities, the only movement outside of the MOE is in Toronto, where the Conservatives have gained nine points and are almost tied with the Liberals. 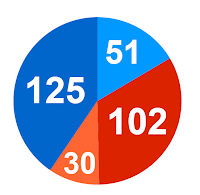 This poll also has the "second choice" question, which I always love.

Finally, among Green voters, 30% choose none, 24.2% choose the Liberals, and 23.6% choose the NDP. Talk that the Greens are more right-wing than most people think seems unfounded.
Posted by Éric at 11:54:00 AM