Harris-Decima has posted the results of its poll, which is now a week old. 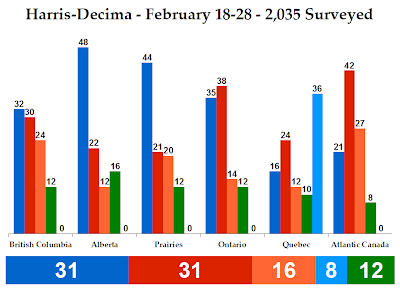 This actually shows very little change since HD's last poll, taken between February 4 and February 14. The Conservatives drop one and the Liberals gain one to tie at 31%, while the NDP remains stable at 16%. The Bloc drops two points nationally while the Greens gain two points, rising to 12%. The MOE of 2.2, however, puts all of these within the statistical noise.

Speaking of which, for regional results I will only mention variations outside of the MOE in the future.

In Ontario, the Liberals remain in the lead at 38%, with the Conservatives close on their heels at 35%. The Tories should be happy they are still putting up a fight in Ontario, because the way their vote in the West is dropping they need those seats. The NDP is struggling at 14%.

In Quebec, the Bloc drops five points to 36%, still well ahead of the Liberals at 24%. The Conservatives are weak at 16% but the NDP is strong at 12%.

In British Columbia, the Conservatives hold a small lead with 32%, while the Liberals have gained seven points and are at 30%. We've been seeing a close race here poll after poll. The NDP is at 24%.

The Conservatives have dropped 10 points in Alberta and stand at 48%. The Liberals are doing well with 22%. The Prairies is as it always is, while the Liberals are way ahead in Atlantic Canada with 42% to the NDP's 27% and the Tories' 21%. 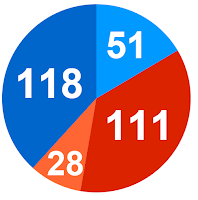 The Conservatives would still take the most seats, with 65 out West, 42 in Ontario, 6 in Quebec, and 5 in Atlantic Canada for a total of 118.

The Liberals would stand very close to that number, with 20 seats out West, 53 in Ontario, 16 in Quebec, and 22 in Atlantic Canada for a total of 111.

Like Allan Gregg says in the poll's analysis, this appears to be the new normal. Until further notice.
Posted by Éric at 11:01:00 AM