Léger Marketing has a new poll out on the voting intentions of Quebecers. 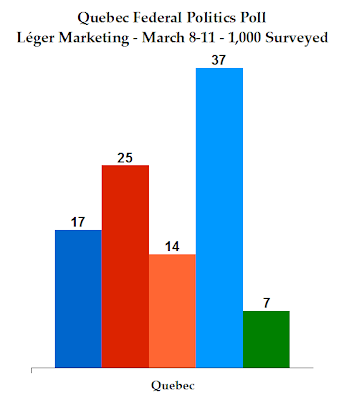 Compared to Léger's last poll a month ago, this is not very different. The Bloc Quebecois has dropped one to 37%, the Liberals have dropped two to 25%, the Conservatives are up one to 17%, and the NDP is up two to 14%. But the margin of error is 3.1, so really statistically insignificant movement.

Among francophones, the Bloc dominates with 45%, followed by the Liberals at 21%. The NDP and Conservatives are tied at 14%.

Among non-francophones, the Liberals dominate with 41%. The Conservatives follow with 28% and the NDP is third with 15%. Remembering that this is a smaller sample size, this is a loss of 12 points for the Liberals and a gain of 10 for the Conservatives among this demographic. Could the Tories be ready to break into English Quebec, or is it just a statistical mirage?

Imagine how different the Quebec political landscape would be if the Conservatives and Liberals were vying for the anglophone vote.

Around Quebec City, the Bloc has gained five points to take the lead at 34% - a very good result for them. The Conservatives are down to 28% and the Liberals are up to 23%.

Finally, in the "Rest of Quebec", the Bloc has 39% to the Liberals' 20% and the Conservatives' 18%. This puts the Bloc in a good position to sweep the non-Montreal and non-Quebec City seats. 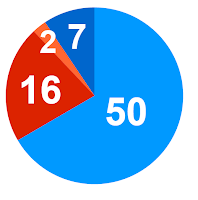 The Bloc wins 50 seats and the Liberals win 16. The Conservatives are reduced to seven seats, and the NDP wins two.

Nothing much new in this poll, though it does confirm the stagnation of the Liberals and Conservatives at levels which mean little growth.
Posted by Éric at 8:45:00 AM