EKOS has come along with its weekly poll. As usual, it is boring. B-O-R-I-N-G. 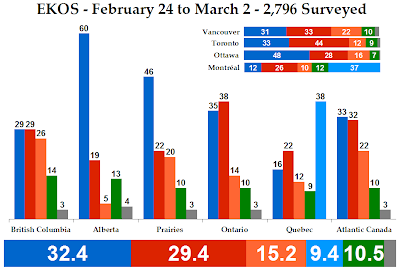 In Ontario, the Liberals are doing very well at 38%, while the Conservatives are still in the game at 34.9%. The NDP is struggling at 14.3%. Any variation from EKOS's last poll were within the 3.3 MOE.

Finally, the cities. The only movement that is over and above the MOE is in Vancouver, where the Liberals have gained 10 points. This seems to have been a major source of their move into first place in the province. The Liberals and Tories are vying for top spot in the city.

In Toronto, the Liberals have a 10-point lead, while in Ottawa the Conservatives have a 20-point lead. The Bloc is doing well in and around Montreal, but oddly the NDP is doing worse here than in the province as a whole. 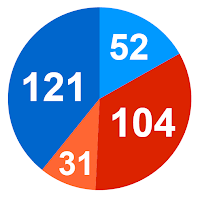 The NDP wins 13 seats out West, 12 in Ontario, 2 in Quebec, and 4 in Atlantic Canada for a total of 31. With the Liberals, they would outnumber the Conservatives.

The Bloc wins 52 seats, thanks to the weakness of the Liberals and Tories. The Greens are shut out.

This poll demonstrates a few things. First, that Ipsos-Reid poll suffered from the MOE. Second, there hasn't been much of a change anywhere. The race to watch, though, could be in British Columbia.
Posted by Éric at 8:38:00 AM