Nanos Research has a new poll out, and while it shows the close race that everyone else is showing, it also has some major differences. 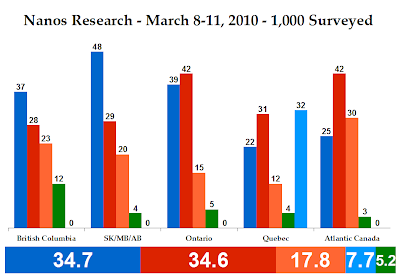 Nationally, the Conservatives have the slimmest of leads with 34.7% to the Liberals' 34.6%. More importantly, though, is that this marks a loss of 0.9 points for the Tories and a gain of 0.7 points for the Liberals when compared to Nanos's poll in February.

The margin of error, however, is 3.5 points so no one has moved outside of the statistical noise.

Also note that Nanos does not prompt, which is why the Greens tend to do worse in their polling.

Nanos shows huge numbers for both the Tories and Liberals in Ontario. The Liberals lead with 41.7%, followed by the Conservatives at 39.2%. Both parties would be very, very happy with this level of support. What kind of result would come from such strong numbers from both parties, though, is more troublesome. The NDP is weak at 14.6%.

In Quebec, the Bloc Quebecois is down to 31.5%, though that is down about two points and so within the MOE. Nanos has had the Bloc at a much lower level than they have been in other polls, and as this seems to be a Nanos consistency in 2010, we can probably assume that the Bloc is doing better than this. The Liberals are up to 31%, and the Conservatives are also doing well with 21.8%.

Nanos groups Alberta, Saskatchewan, and Manitoba together so I can't use those numbers. But all of the variation since their last poll is within the MOE. 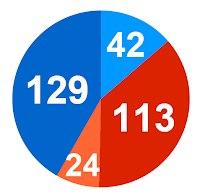 Using my current projections for Alberta and the Prairies, the Conservatives win 69 seats in the West, 45 in Ontario, 10 in Quebec, and 5 in Atlantic Canada for a total of 129.

The Bloc takes a big hit and drops to 42 seats.

A somewhat unusual poll when we look at the regional results. One wonders if this is because Nanos doesn't prompt, while most of the other pollsters do. That doesn't make these more accurate, but it does mark a significant methodological difference.
Posted by Éric at 8:47:00 AM