Angus-Reid has released a new federal poll, and though it shows some variation from other polls we've seen, there actually has been very little movement. 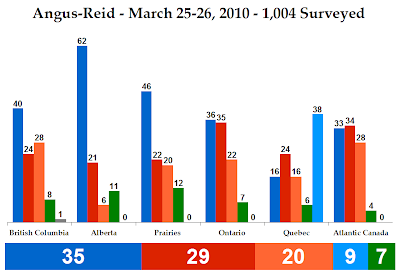 The Conservatives have opened up a six-point lead with 35%, up two points from Angus-Reid's poll taken at the end of February. The Liberals are unchanged at 29%, as are the New Democrats at 20% and the Bloc Québécois at 9%. The Greens are the ones who seemingly handed over points to the Tories, as they are down two to 7%.

(Don't miss my post on Manitoba polling which was put up earlier this morning.)

This is a great result for the NDP, but nothing new when it comes to Angus-Reid. It is also a good gap for the Tories, but a gain of two points over a month in a poll with a MOE of 3.1 is perhaps not enough to celebrate.

In Ontario, both the Liberals and Conservatives have gained two points, with the Tories maintaining a lead of 36% to 35%. The NDP is steady at an excellent 22%.

In Quebec, the Bloc has gained four points and stands at 38%, while the Liberals are down one to 24% and the Conservatives are down three to 16%. These are not the kind of numbers the two major federalist parties want to see in Quebec, but it is good news for the Bloc. The NDP is steady at 16%.

In British Columbia, the Conservatives have made a large seven point gain, and stand at 40%. The NDP is at 28% while the Liberals have dropped nine points to 24%.

There hasn't been much movement in Atlantic Canada, as the race is a three-way one. The Liberals lead with 34%, followed by the Conservatives at 33% and the NDP at 28%.

The Conservatives have gained seven points in Alberta, and are at 62%. The Liberals are still strong with 21%, though that is down six points. In the Prairies, the Tories are down six to 46% while the Liberals and NDP are up five each at 22% and 20%, respectively. 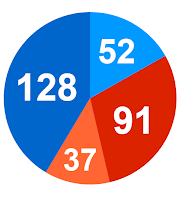 Angus-Reid is usually a little bit out of step with some of the other pollsters, the main reason seeming to be the under-performance of the Greens in their polling. Whatever their methods are, it seems to benefit the NDP and the Conservatives over what other pollsters show. Interestingly, however, virtually all pollsters have shown similar results for the Liberals. Perhaps the centrist voter is the easiest one to poll.
Posted by Éric at 10:24:00 AM