Ghiz's Liberals Comfortably Ahead in PEI

Corporate Research Associates polls where no one else will: Prince Edward Island. That might not be true. 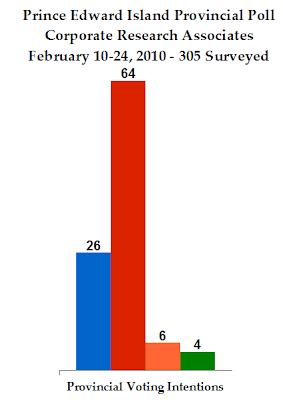 The PEI Liberals are well ahead of their main rivals, the Progressive Conservatives. They have gained seven points since November, and are at 64%. However, that is no statistical anomaly. They were at 64% one year ago.

The Progressive Conservatives are down five points to 26%, down two overall since February 2009.

The Island New Democrats have gained three points and stand at 6%, where they were a year ago.

And the Greens are at 4%, up one from November and up two from last February.

Prince Edward Islanders seem to be very happy with their Liberal government, as 67% say they are satisfied (up seven). Only 27% say they are dissatisfied.

Current Liberal Premier Robert Ghiz is the favourite to continue as Premier, with 48% choosing him as the best person for the job. The Progressive Conservatives, however, are leaderless at the moment and 17% chose the "next leader" of the PCs. Finally, James Rodd of the NDP received 7% support.

Politics in such a small province can't help but be local. However, there are some things we can extrapolate from this poll for the larger federal scene.

In 2008, the Liberals had 48% in the province. Certainly below the present standings of the Liberals, but not much different than the PEI Liberals' performance in the 2007 provincial election, when they had 53%. Going back to the 2006 federal election, we also get the federal Liberals at 53% on the island. So, Ghiz's Liberals doing so well bodes well for Ignatieff's Liberals. There's a good chance the federal Liberals will be able to re-take all four seats on the island.

But, one interesting thing to look at is the performance of the PEI NDP. They are very weak, at only 6% in this poll and in 2007 they earned less than 2% of the vote. The federal NDP does better, with about 10% of the vote in 2008 and 2006. But even that was one of their worst performances in the country. Whether the provincial NDP is dragging down the federal NDP, or vice versa, or that Prince Edward Islanders simply don't go for the social democratic thing, is hard to say.

The next election in PEI will take place sometime before October 2011.
Posted by Éric at 2:07:00 PM