Progressive Conservatives Ahead in Manitoba

Angus-Reid released a new Manitoba provincial poll on March 18. It shows a close race, but the Progressive Conservative opposition is now in the lead. 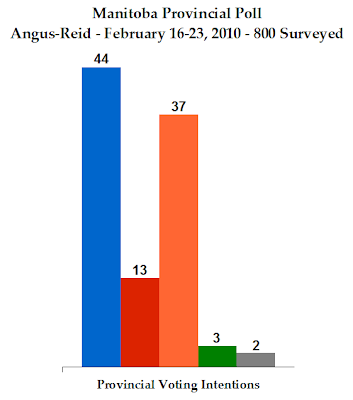 The Progressive Conservatives are up to 44% in the province, while the New Democrats are at 37%. The Liberals stand at 13%, while the Greens are at 3%.

The last Manitoba poll I have was done in December by Probe Research. That poll had the NDP up 47% to the PC's 37%. So, if we can compare these two, this is a big change.

In rural Manitoba, the Progressive Conservatives dominate with 55%. The NDP is at 28% and the Liberals are at 13% here.

As compared to the province's 2007 election, the NDP is down 11 points. But, Gary Doer (who led the NDP to victory in that election) is no longer Premier. The PCs have gained six points since that election, while the Liberals have only gained one.

There are large differences between the federal and provincial political scenes in Manitoba. In the 2008 federal election, the Conservatives had 49%, the NDP 24%, and the Liberals 19%.

This is the last of the provincial polls in my backlog. I hope to have a projection update soon, though tomorrow will undoubtedly see the release of the EKOS poll. Also, I'd appreciate if the comments in response to this post stick to Manitoba politics, rather than what is going on in the House of Commons.
Posted by Éric at 9:35:00 AM