Time to look at February's polling. Twelve national polls were taken during this month (seven more than last month), totalling about 26,060 interviews. Here are the results we get at the national level, with the difference from last month's average in brackets.

The Conservatives manage a tiny rebound, but it pales in comparison to their 4.4-point loss in January. The Liberals also make a small gain, but this is a gain of almost three points compared to December's result. The NDP hardly moves at all, but they would much prefer to be at around 2008's 18%. The Bloc drops, but it is more important to look at the Quebec number. The Greens drop a little, but it is still a 1.6-point gain since December. It is quite astonishing to see such a close race between the Tories and the Liberals at such a low number. 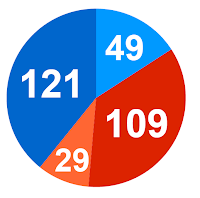 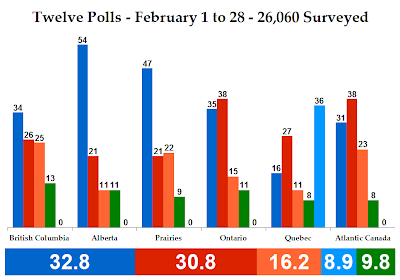 The Conservatives manage to tread water and make a small gain, but they are still more than four points lower than their December level. The Liberals remain stable, which is good considering their level of support. The NDP drops a little, but this is a drop of almost two points in two months. The Greens seem to always be taking steps backwards and forwards in this province, losing ground this month.

The Conservatives drop a little, but this is more than five points of losses since December. The Liberals are up, a gain of more than three points in two months. What is going on in the west? The NDP has dropped about two points, erasing their January gains. The Greens are up a point in two months.

In all, the Conservatives take 66 seats in the West. The Liberals win 18 and the NDP win 11.

The Liberals are up almost a point, marking gains of almost four points over the last two months. After losing four points in January, this is a small drop for the Tories, but worrisome for them nevertheless. The same goes for the NDP, who lost one point in January and now another small loss in February. The Greens remain stable.

The Bloc wins 49 seats while the Liberals win 18. The Conservatives are reduced to six and the NDP win two.

The Liberals dominate with 20 seats, while the Conservatives (eight) and NDP (four) split the rest. 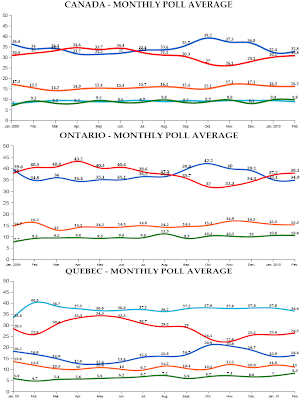 The Conservatives are starting to re-gain their balance, with gains in Atlantic Canada, Quebec, and British Columbia. But they are modest gains when compared to the huge losses they've suffered, and they are still down in Ontario, the Prairies, and Alberta. While those two last regions are still safe, something has to be done in Ontario.

The Liberals continue to make gains, which they have done in every region of the country. They are re-establishing themselves in Ontario, Quebec, and Atlantic Canada (their bread and butter), and are even making inroads in British Columbia and Alberta. In other words, they are heading in the right direction.

The NDP had a very rough month in February, losing ground in every part of the country. Their large losses in Atlantic Canada and the Prairies are troublesome. They seem to be suffering from the Liberal re-bound as much as the Conservatives have been.

With a loss in British Columbia and stability in Ontario, the Greens are not closer to electing their first MP.
Posted by Éric at 11:08:00 AM