I've updated the pollster leanings chart for Canada and Quebec, incorporating the polling from the month of February 2010.

In Quebec, the top pollster for the Bloc Québécois is Harris-Decima, who polls them 2.8 points higher than the average of other pollsters. The worst is CROP, which polls them 3.7 points below average.

The top pollster for the Liberals is Environics, polling them 5.9 points higher than average. The worst is EKOS, which polls them 3.5 points lower than the average.

The top pollsters for the Conservatives are Ipsos-Reid and Nanos, polling them at 1.4 points higher than average. The worst is Environics, 4.0 points lower than the average.

Just for fun, let's take Angus-Reid's poll from Monday and apply these numbers to it:

This gives an indication of how well the NDP did in this Angus-Reid poll.

The chart below tracks how each pollster tends to lean when calculating support levels for the various parties, as compared to the average polling results from other pollsters each month. This does not necessarily equate to a deliberate bias, but instead is more reflective of the polling methods used. This is also not a scientific calculation of any kind, but it does give an indication of how each pollster tends to compare to others. 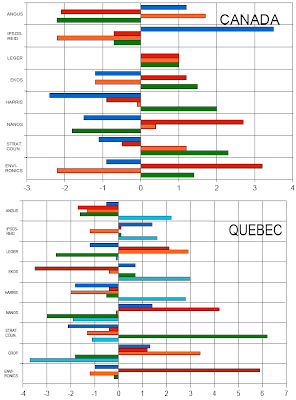