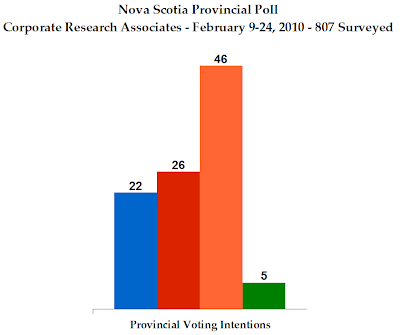 Darrell Dexter's New Democrats are still well ahead of the Liberals with 46% to their 26%. However, that is a drop of seven points for the NDP since November and a gain of four points for the Liberals. Nevertheless, the gap is 20 points, and since February of last year the NDP is still showing a gain of 10 points.

The leaderless Progressive Conservatives are at 22%, up one point since November but still down eight since this time last year. The Greens are at 5%, also up one point.

49% of Nova Scotians are satisfied with Dexter's government, down 14 points since November.

He is still the favourite for Premier, however, with 35% (down nine). Stephen McNeil of the Liberals is the best man for the job for 26% (up five) while the "next PC leader" is at 11%. Good for him/her!

In federal polls recently we've been seeing the NDP struggling in Atlantic Canada. Could part of that dip be caused by the small drop in Dexter's popularity?
Posted by Éric at 3:35:00 PM