Central Asian dictators don't even fake numbers like this 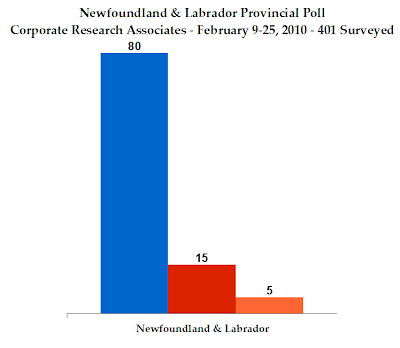 The Progressive Conservatives lead in Newfoundland & Labrador by 65-points. Yep. They have 80%, and even that is a three point gain since November 2009. It is a nine-point gain since February 2009.

The Liberals are at 15%, down one from November but seven from February of last year. The NDP is hardly a party with 5%, down two from November.

Obviously, Danny Williams is the favourite for premier with 81% support. What is astonishing is that most other party leaders have trouble even coming close to their party's level of support. Williams does them one better and beats his own party. Heart surgery, schmart schmurgery.

Yvonne James of the Liberals is at 8% and Lorraine Michael of the NDP is at 5%. Leading these parties must be depressing.

Anyway, I first made the bold prediction of a Williams majority in the next election back at the end of 2009. People called me crazy. Now that we're a few months closer to it, and Williams has confirmed he will run again, I have to say my impression hasn't changed.
Posted by Éric at 2:55:00 PM