Another EKOS poll shows the major parties are as limp as (insert your own off-colour joke). 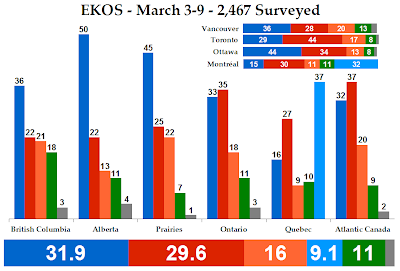 These are weak numbers for both the Liberals and the Tories, and even the NDP. No party would go to an election with any certainty with these kinds of numbers. While all changes are within the MOE, this does indicate that the Conservatives are just as road-blocked as the Liberals. As the EKOS analysis says, the budget hasn't budged the numbers.

No variations in the Prairies and Atlantic Canada are larger than the MOE, but in Alberta the Conservatives have dropped 10 points (MOE 6.3) to 50.2% while the NDP is up 8 to 13.0%. The Liberals continue to show strength with 21.9%.

No changes in the cities are larger than the MOE, which ranges between 6.5 and 9.0. But, the Conservatives have the lead in Vancouver and Ottawa, while the Liberals are well ahead in Toronto and making a race of it with the Bloc in Montreal. 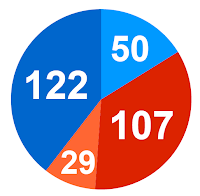 The Bloc wins 50 seats in Quebec.

This minority would be weaker than the one Stephen Harper won in 2006. So, who knows what kind of government would come out of it.

A boring poll that confirms a less boring reality: it's a close race, but no one is showing any real strength.
Posted by Éric at 8:55:00 AM