Boy, sometimes I can really sense the urgency of the news cycle. Those journalists have it rough! This Angus-Reid poll landed in my inbox only 130 minutes ago, but already people are talking about it on this blog, the Twitterverse is already past it, and now we're just waiting for Harris-Decima to post the results of their poll. Sheesh! I just wanted to have lunch and had some work stuff to deal with! 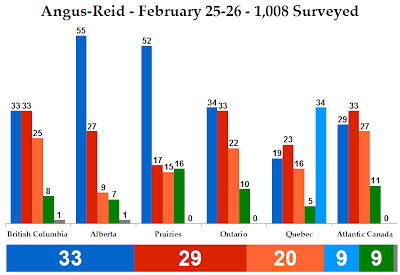 Compared to their February 11-13 poll, the Conservatives are up one point (33%), the Liberals are down one (29%), and the NDP is up two. They are at 20%, which is generally their ceiling but always good news for them.

The Bloc is stable nationally and the Greens are down one.

This is more in line with what we've been seeing, especially considering the HD poll today. But, these results are within Ipsos-Reid's MOE, so maybe we just need to chalk up the big gap in that poll to that.

In Ontario, the NDP is up five points and is at an amazing 22%. It actually causes them to hit their seat ceiling in my projection. The Conservatives are down three and the Liberals are down two.

In Quebec, the Bloc is down one to 34%. They seem to poll lower in Angus-Reid polls. The Liberals give five points to the Conservatives (23% and 19%, respectively), while the NDP is up two.

In British Columbia, the Conservatives drop three points to 33%, the Liberals gain seven points to tie them, and the NDP gains five points to stand at 25%.

In the smaller regions, of note is the Liberals at 27% in Alberta. That's up nine points, so a huge variation, but part of what we've been seeing in the province. In Atlantic Canada, the Liberals drop eleven points (eight of them going to the NDP). 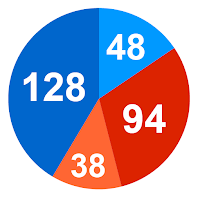 The Bloc manages to hold 48 seats.

The poll also asked people whether the various party leaders should remain as head of their respective parties. You can check out the link to see the numbers, but in general, about 4 out of 5 party supporters like the guy heading their party (88% of Bloc supporters are happy with Duceppe), but for the Liberals that drops to about 3 in 5.

It's odd to think the Stéphane Dion had similarly woeful numbers, but yet Michael Ignatieff seems infinitely safer as party leader. I'm not sure why people have such a problem with Ignatieff, he isn't noticeably better or worse than any of the other leaders. They all sound like sleazy car salesmen some days, and they all sound like likable human beings on other days. Did the Tories succeed in defining him?
Posted by Éric at 2:06:00 PM