Harris-Decima has a new poll out, without any major surprises. But it does show some Conservative strength. 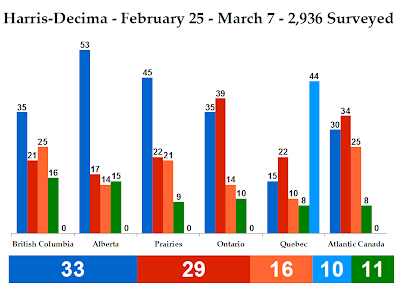 The Liberals lead with 39% in Ontario, a good number for them. The Conservatives are at 35%, so still in striking distance. The NDP is weak with 14%.

The Bloc shows a big eight-point bounce (MOE is 3.6) and stands at 44%, one of their better results in a long time. The Liberals poll at half that strength, with 22%. The Conservatives are also hurting at 15%.

The Tories are still showing some trouble in British Columbia with 35%, while the NDP is steady with 25%. The Liberals have dropped nine points (MOE 5.2) to 21%.

All variations in Alberta and the Prairies are within the MOE, but in Atlantic Canada (MOE 5.6) the Liberals have dropped eight points to 34% and the Conservatives have gained nine (30%). 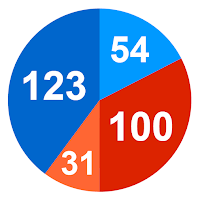 The Liberals win 14 out West, 54 in Ontario, 14 in Quebec, and 18 in Atlantic Canada for a total of 100. Poor performances in BC and Quebec hurt them in this poll.

The Bloc wins 54 seats in Quebec, matching their all-time best.

Nothing really new in this poll, though it does show a potentially volatile British Columbia. Liberal strength (relatively speaking) continues in Alberta, and they are still showing great numbers in Ontario. But the Tories are not going away in that province.

On another note, I recommend you read Manon Cornellier's piece in today's Le Devoir about the government's budget strategy. If you can't read French, Google Translator may help you. Cornellier is one of the more under-rated political pundits in the country. Her pieces are always very detailed and focus more on substance than most pundits do today. Le Devoir also seems to give her more space on the page than the Don Martins, Jim Traverses, and Chantal Héberts of the media world. She really deserves a look.
Posted by Éric at 9:43:00 AM