Léger Marketing released a new provincial poll a week ago. It shows a statistically significant gap between the Parti Québécois and the provincial Liberals, something we haven't seen in awhile. 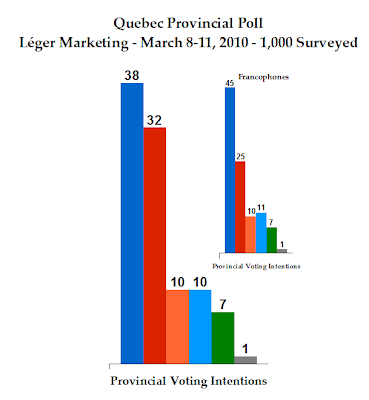 However, not all is roses for the PQ. They are down two points to 38%, but a five point drop by the PLQ to 32% puts the PQ firmly in the lead.

Among francophones, who decide the vast majority of seats in Quebec, the PQ is still well in the lead with 45%, though down three points from Léger's February poll. The Liberals have dropped four points to 25% among this demographic. QS is up three to 10%, the ADQ up two to 11%.

Among non-francophones, the PLQ continues to lead with 67%. QS follows with 9%, then the PVQ with 8% and the PQ with 7%.

In and around Quebec City, the PLQ also leads with 35%, followed by the PQ at 28%. The ADQ has virtually all of its support here, as they have 24% in the region.

Only 24% of Quebecers are satisfied with the government, down nine points since February. The issues in Quebec concerning corruption in the construction industry, questions about political financing, and perhaps even the resurgence of the accommodemants raisonnables issue all seem to be hurting the Liberals.

Pauline Marois of the PQ is now the favourite for premier, with 24% (unchanged since February). Jean Charest of the PLQ has fallen eight points to 20%. Amir Khadir of QS is at 9% and Gérard Deltell, leader of the ADQ, has dropped one point to 6%. That seems to indicate that Deltell is not becoming better liked as Quebecers get to know him better.

Thanks to strong results around Montreal and Quebec City, the PLQ manage to win 50 seats. But, the PQ still forms government with 68 seats. The ADQ win five seats around Quebec City and QS elect two MNAs on the island of Montreal.

From a federal perspective, it is always good news for the Bloc Québécois when the PQ is doing well. They share the same voters. And with QS at 10%, a full 48% of Quebecers are supporting sovereigntist parties. For the Liberals and Conservatives in Ottawa, it makes things difficult as the PLQ and the ADQ are both showing unpopularity. Obviously, both Ignatieff and Harper will stay away from Deltell. But now even Charest appears to be problematic as a working partner.

Nevertheless, Charest seems to have as many lives as a cat, and he could turn things around before the 2012-2013 election - if he decides to run again. If not, the PQ could have a relatively easy time as there is no heir apparent among provincial Liberals.
Posted by Éric at 8:30:00 AM