Ipsos-Reid has a new poll out, but it doesn't have any breaking-news results. 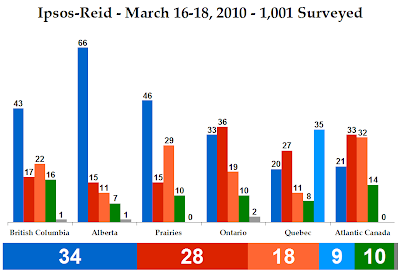 The Conservatives have a solid lead over the Liberals at 34%, but their lead has actually shrunk from eight points to six points since Ipsos-Reid's last poll taken at the end of February. They've dropped three points.

The Liberals have also dropped, but only one point. They are down to 28%. The New Democrats are up two to 18% (a very good result) while the Greens are up three to 10%.

In Ontario, the Liberals have lost four points but still lead with 36%, thanks to the Tories also losing four points to drop to 33%. The NDP is the net beneficiary, with a gain of four points to 19%.

In Quebec, the Bloc Québécois drops four points to 35%, but is still well ahead of the Liberals who have gained two points (27%). The Conservatives are up three to 20% and the NDP is steady at 11%.

The Tories continue to lead in British Columbia with 43%, a much better result than other pollsters have shown. The NDP follows with 22% and the Liberals are well behind with 17%. The Greens are at 16%.

In Atlantic Canada, the small sample size has led to an 18-point Tory drop and a 14-point NDP gain. Overall, the Liberals lead with 33%.

In Alberta, the same goes as the Tories pick up 15 points and are at 66%. The NDP drops seven.

In the Prairies, the Tories and NDP swap 13 points to the NDP's advantage, though the Conservatives still lead with 46%. 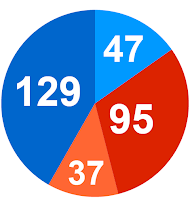 Thanks to extraordinary results west of Ontario, the Conservatives take 129 seats overall. They win 77 seats in the West, 37 in Ontario, 9 in Quebec, and 6 in Atlantic Canada.

The Bloc wins 47 seats in Quebec.

Ipsos-Reid showed a much larger gap in their February poll, unlike what most of the other pollsters were showing. Now that they show a smaller gap, larger than some of the other pollsters, we can't help but take this poll as a step backwards for the Conservatives. The only party that can be happy with these results is the NDP.
Posted by Éric at 11:31:00 AM